I curled the greenery in the vase in the entry.

Found the store hours sign and Visa and MasterCard signs and shrunk them down then glued them in the window of the door. 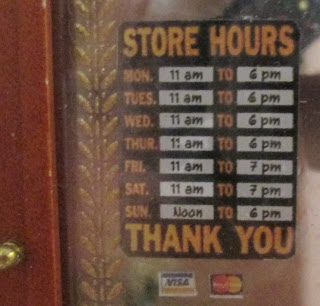 Put the glass back in the shop window. 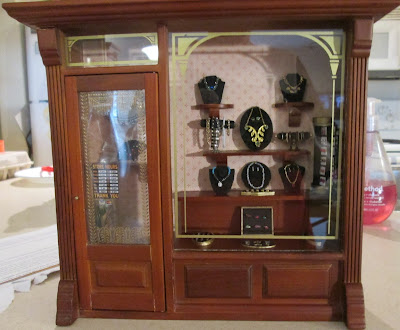 The top left necklace was from my stash and I'm pretty sure it was by the late Sherrill Bedu of Calgary. The bottom left necklace is by Judy Lawton of Penticton who gave it to me years ago when Cheryl H., Lucille L. and I went to the Kelowna Show and Sale.

I still have lots of forms and supplies left so I'll be making more jewellery later for a bedroom that I'm working on.

This has been SUCH fun!

Still want to make some signs for the door with store hours and Visa and Mastercharge signs. I'd also like to put a battery-operated ceiling light in it but I don't have any in my stash at the moment.

And I need to put the glass in the window but I want to make sure everything will stay  in place before I do that as the glass is a very tight fit and it's very difficult to remove. 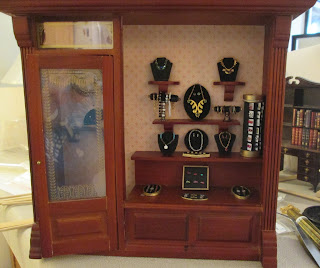 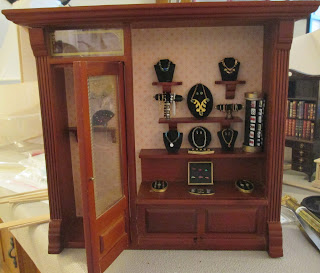 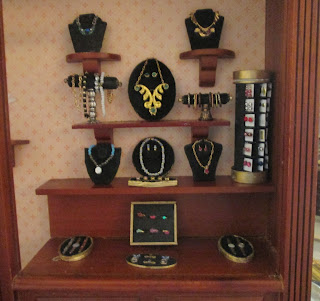 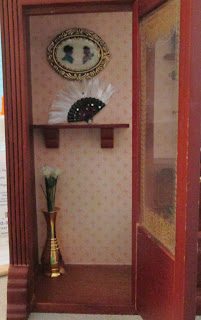 Posted by stalbertmini at 1:56 PM 6 comments:

No pictures but some comments on the jewellery

I haven't been so excited about individual pieces since I went on my perfume bottle making binge and ended up with Scentimental Journey.

I still have all the instructions from Linda Austin's jewellery class available to me but I must admit that I am really enjoying taking things from my beads/findings/crystals stash and making my own things based on all that I learned from Linda.

I guess the biggest thing is that I'm trying to make things for the shop window and make some others for a bedroom (to place on the vanity). And I'm not always too sure which will be which.

Anyway, the best thing is that I'm having a ball doing it....

And hopefully I'll have some pictures for you later...
Posted by stalbertmini at 10:08 PM 2 comments:

Tuesday night I went down to Stitch and Bitch and made 10 more pair of earrings and added 8 of them to the earring stand.

One of the ladies who is a quilter said she had some empty Mettler spools that I could have so I'll have more to share with my club members who want to try this.

Just a note here about painting the spool. I originally tried to use a black market but it wasn't small enough to get in all the nooks and crannies - and there are a LOT of them. So I ended up just painting it with black acrylic paint. It worked well enough and because the stand won't get a lot of handling, the acrylic will work. I think though that using a black spray primer would be the best.

These pictures are terrible but the best I could do considering how very small these rings are.

The rings themselves are 5/16" gold coloured jump rings so we're talking tiny.

I slipped the two attached jump rings onto the end of a skewer, dropped on three small drops of Tacky then put two red flatbacked stones in place with a flatbacked irridescent stone between them. Then I left it to dry overnight. 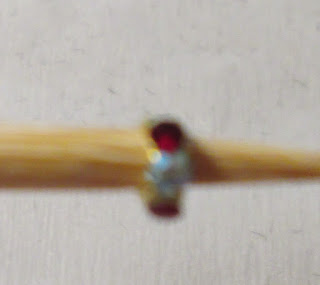 Five of these rings were made by slipping a jump ring on the tapered end of a skewer then adding about 3/16" of Tacky glue on each ring and dipping the ring into a bottle of no-hole beads, pulling it out and letting it dry at least overnight.

One was made by gluing some larger red no-hole beads on the band.

This was made by Tacky gluing a flatbacked green stone to a jump ring. 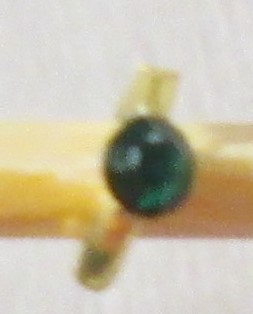 I wanted to display the rings in a display case so I glued two layers of fun foam to a very thin layer of wood.

Painted some 1/4" scrap trim with the Krylon gold and added it on all four sides. 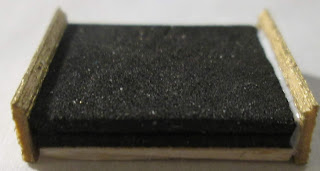 I cut two slits across the box with an X-Acto knife to put the rings in. That didn't work! Lost the beads on the ring that I tried to put in place. So I took the end of a toothpick and widened the channel with that. Did the trick! 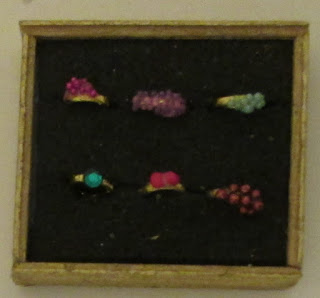 Quite honestly, it doesn't look all that great in the closeup but (other than the fact that the second row is not parallel) it looks pretty darn good in person!

I want to make an individual setting for the first ring and will have to give that a bit of thought.
Posted by stalbertmini at 10:20 PM 6 comments:

A couple weeks ago, I remembered that Carol Jones in Victoria had made an earring stand that I always admired. I had kept about 10 of the particular thread spools that she had used and decided I'd like to make one for the jewellery store to go with the jewellery I had made in Linda Austin's workshop.

I only had a vague memory of the stand so I emailed Carol and she was kind enough to send me a picture of it.

So I pulled out one of my thread spools (Mettler). 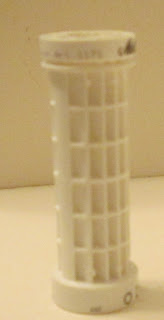 In keeping with the rest of the display pieces I had already done, I painted the middle section of the spool black.

Then I used the Krylon gold pen to paint the top and bottom.

For earrings, I started with this piece of stick-on design meant to decorate a cell phone case (from Dollarama). I cut little pieces into earrings and stuck them to the pieces of photo paper. 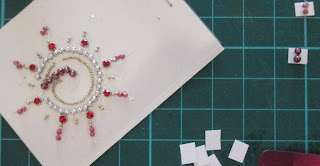 I also used little sections of the Flower Soft stickers for some earrings and made one pair from the nail decorations below that. (Being white, they didn't work too well as they didn't show up well against the photo paper.) 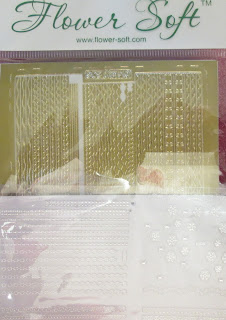 Here are the ten pairs of earrings I made so far. 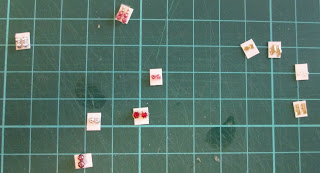 And here they are glued in place in the stand.

I'll need to make a lot more to fill it but I'm off to a good start.

I do have some great nail art pieces that are too big for earrings so I may end up doing earrings on one side of the stand and making brooches for the other side.

Am very pleased with it so far.
Posted by stalbertmini at 9:04 PM 9 comments:

My friends, Marijke and Marilyn, and their club in New Brunswick have made this incredible tribute to the veterans of WWI.

Both Marilyn and Marijke have blogs so you have to switch back and forth between them to see the work. Marilyn (Charminis) and Marijke (Pulchinellascellar) Click on the links to see their work.)

What incredible work! My grandfather was a WWI veteran so this has a lot of meaning for me.

I'm slowly but surely working on the jewellery from Linda's workshop. Well, mostly anyway. I dragged out all my own beads, findings and already made pieces.

The white necklace is from beads in my stash, the other three are from Linda's workshop. 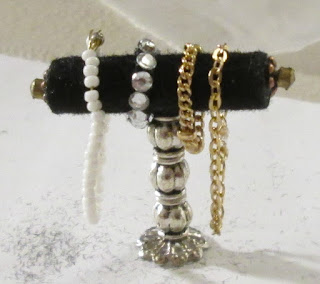 I've always been a huge fan of fans and collected them for awhile 50 years ago. I got a small supply of these 'silver' metal fans years ago and still have some left so I took one and painted it black with a black marker.

Took some of this eyelash yarn from my stash...

And glued a strip of it along the back of the top of the fan. 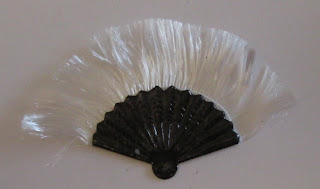 In our bag of  'bits and pieces' from Linda was a great bag of sequin holes. Using a piece of spaghetti (dampened on the end) to pick them up, I glued some of them to the fan. 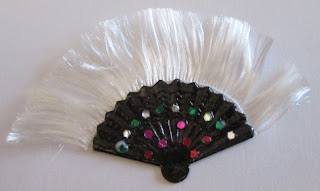 Then I cut one section from the eyelash yarn and glued it to the bottom. 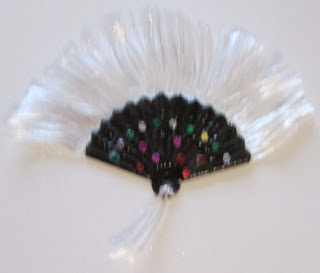 I have other odds and ends of things that are in the works. This project is such fun!
Posted by stalbertmini at 8:41 PM 4 comments:

A gift for Diane

Diane, the manager of Mom's building, has a birthday on Monday, April 8. She's a lovely woman who is great with all the residents and their families.

So we wanted to give her a gift this year but time was short so I looked around at my finished projects and thought about giving her this Christmas room. Wrong season but... 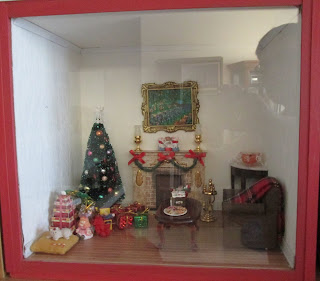 Shirley thought it was good but we know Diane is more a dog person so thought we should replace the kitten with a dog but I didn't have one that would work.

THEN....I looked in front of me to my coffee table and there was the living room in a cake stand that I made some time ago.

So that's what we've decided to give her. 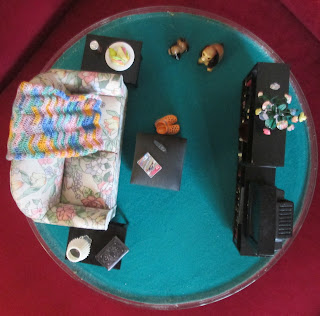 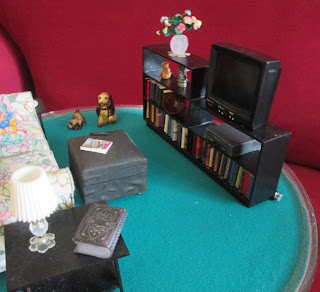 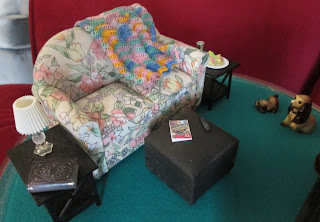 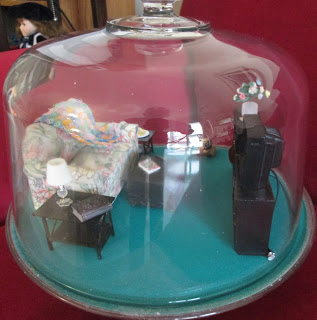 So I took it to Mom's yesterday and we'll give it to Diane on Monday.
Posted by stalbertmini at 8:20 PM No comments: