I'll be sharing some my ready-made lettuce made from artificial snow flakes, and a few other things and ideas.

Will have kits available for the following:

This bedspread is made from just over 7' of daisy trim. 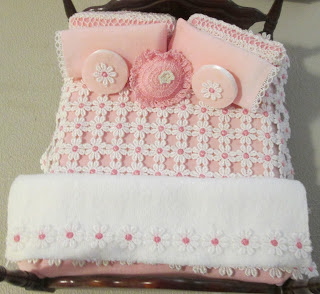 Bowls made from quilling paper.

Stock pot made from a copper plumbing end cap. (Demo only) 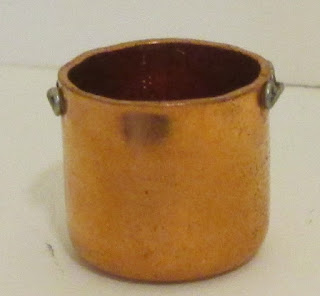 For the pantry, canned goods and cleaning supplies  (quilled paper) 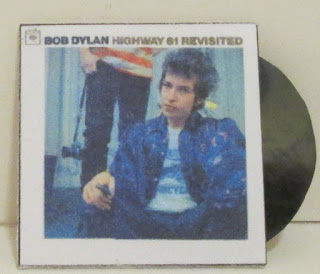 I'll also have a non-working parts cabinet and cans of spray paint (unable to load a picture right now.)

One of my all time favourites is making knives from toothpicks.
Posted by stalbertmini at 7:40 PM 1 comment:

Saturday will be our first all day workshop for this year. We'll  have lots going on!

There will be four separate workshops during the day in line with this year's theme of using an unusual container to house a miniature scene..

We'll start at 9:00 with muffins and coffee and set-up.

At 9:30, Gilbert will teach us how to use a tin or plastic container as a miniature setting.

At 10:30, I'll be showing how to reinforce a gift bag to use as a roombox.
At 11:30, Marg will be using a wooden book box from Michael's to demonstrate. This can also be done with the cardboard book boxes from Winners.

After a quick lunch at 12:30, at 1:00 Tina will teach us to build a setting in a round container.
Throughout the day, I'll also be teaching several 10 - 15 minute mini-workshops that I'll tell you about tomorrow.

I got the first third of "The Book" collated. 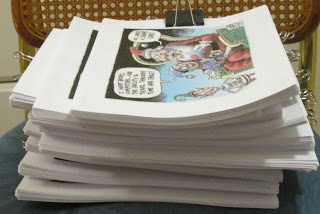 I'll leave the other two-thirds until after Saturday's workshop. Collating them takes a lot of room plus I can't work on them for very long at a time as it's hard on my back.

Posted by stalbertmini at 8:29 PM No comments:

I made the penthouse in 2009 but had never shown it so displayed it at our 2018 Show and Sale. A battery had leaked in the battery pack for the balcony lighting so it had to come out - and the lighting in the bedroom was so weak it didn't show anything off.

Not only that, when I transported it, I realized that I had never glued the back on :-( . It was just held in place with T pins.

So when I got it home, it sat on the dining room table awaiting repairs.....and sat.....and sat.

Since I'm hoping to have some family here for breakfast tomorrow morning (all my sisters and one BIL are in town for DS Shirley's 70th birthday celebration), I could put it off no longer!

For the reasons stated above, I tore out all the old lighting from the back of the roombox 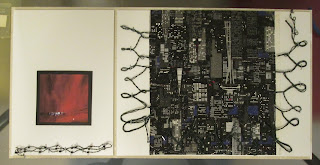 And replaced it with a strip of LED lighting from Dollarama.

Added a strip of carpet tape to the back of the battery pack. 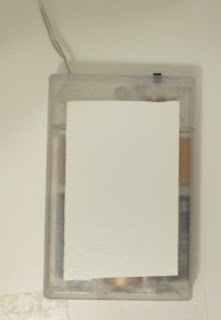 And stuck it to the back of the roombox. (For some reason, it didn't stick - which was okay since I ended up just placing it on the top of the roombox so I can just reach it and switch the lights on.) 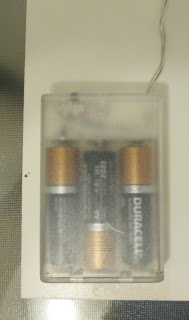 For some reason, adhesives weren't working for me today. The LED strip lighting self-adhesive didn't hold worth a darn so had to glue that down. Held it in place with clothespins while the Weldbond dried.

When that dried, I applied Weldbond all around the room back and in the valley where the room divider was, put the back on and taped it until the glue dried. 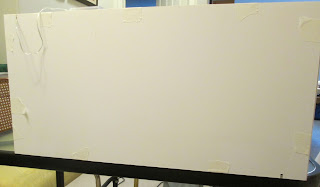 Here is the roombox with the new lights on. Much better. Love it.

The book in the living room is holding down some tiles that I also had to re-glue.

Everything back in place and ready to put back on the bookshelf. 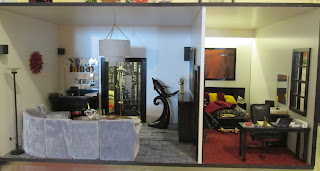 The new lighting is such a vast improvement and the fact that I can leave the battery pack on the roof allows me to turn the lights off and on so much more easily.

Posted by stalbertmini at 10:34 PM No comments:

I don't remember exactly which of my miniature friends came up with this particular acronym - but it certainly applies to me.

Every flat surface in my home is always covered with this, that and the other thing.

Unfortunately, every purchase, workshop item and tool does not get put away when it should.

But, occasionally, I do get caught up at at least one point.

I have a 6' table in my living room that has been a nightmare for quite some time.

Now, I could have shoved everything into a box and considered it done...BUT...this time, I didn't do that. I took everything - one at a time - packaged it in ziploc bags and stored it properly.


Now the pages of "The Book" are poised at the end of the table to be collated and bound. 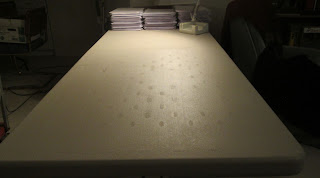 Posted by stalbertmini at 12:30 AM No comments:

All non-mini - Lot of things going on in my life

Sorry I haven't been posting but there has been a lot going on - all non-mini....

Spent most of today printing "The Book" that is my Christmas present to my friends and family. 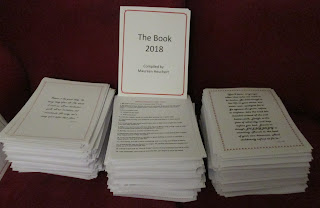 DS Shirley's 70th birthday is on Wednesday but we will celebrate it on Saturday. Younger sister, Carol, will hopefully be there for that before she and her husband leave for Arizona for the winter so wanted to get "The Book" done this year before they left so they would have it for Christmas this year. I've not had it done in time the last couple years so they didn't get it until they came home in the spring.

I still have to collate and bind the book which will take awhile.

In the meantime, I have a lot of ideas for the club's Full Day Workshop on October 27....

Will share some of those things soon, I hope.


Posted by stalbertmini at 11:26 PM No comments: