Luba Barnes
Miscellaneous miniature items and some 1:48 scale items
Luba is also our N.A.M.E. representative and will have a half table on its behalf.

I am SO far behind in letting you know what I've been doing lately that you're unaware that I have dipped my  toe in the world of 1:48 scale.

At the end of May, Luci Hansen of Cascade Miniatures came up from Oregon and taught her Elegant Living Room in 1:48 scale. (More about that if/when I ever get my act together and catch up on what has been happening over the last while.)

On Tuesday night, some of us met at Tina's and she taught us how to make wonderful 1:48 plates. The trick is to use sequins as the base! This is a tip she learned from Jewell Lewis from New Zealand. Glue on the picture, then add gloss varnish of some sort.

Punch out your plate pictures. In this case, Tina had printed out pictures of plates in 1/4" and 3/16". I only have a 1/4" punch but she had a 3/16" punch so was able to punch out those.Take a popsicle stick (or other strip wood) and cover it with a strip of double-sided tape. Put your sequins on it then glue the punched out pieces to them. 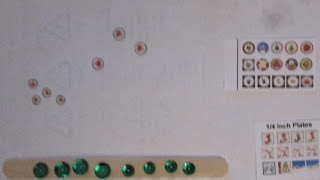 Let dry then coat with a gloss varnish of your choice. I used J. W. etc. gloss clear varnish.

Tina also gave us some of these square sequins: 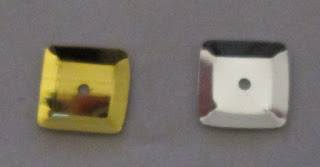 So I did two sets of those.

I still haven't done anything with the pictures on the square gold sequins but I used Glossy Accents clear, dimensional accent on the silver pieces. I used too much but I think once the accent has dried, they'll still look pretty good.

Highlight of the Evening:

Tina's son, Fraser, is a gamer so he is a miniaturist in his own scale. He's very supportive of his Mom's hobby and the club. (He is head of security at our Show and Sale.)

Recently, he bought a 3-D printer and in addition to his own work as a gamer has been making many things for Tina in 1:48 scale.

She is working on this wonderful 1:48 cabin scene built from pieces that Fraser printed for her. I wish I had had my camera with me as it is shaping up so wonderfully! Especially the moose, the Canada geese, the rabbits, etc.

Fraser will be opening his own Etsy shop in the near future so Tina asked us to fill in a form asking what we thought we would be willing to pay for some of the pieces she showed us (unpainted and painted). Since I don't ordinarily work in 1:48 (and I always want to underpay), I wasn't much help.

But in any event, these were the two pieces we received in payment!

I'll keep you posted on Fraser's work as I hear from Tina.

Posted by stalbertmini at 11:11 PM No comments:

Oops! Missed on the first list, our own Bits by Barb (Barb Streithorst)

and now, our new additions: Another World Miniatures (from Yorkton, SK), new to our show Fantastic Minis (Kristy Wipf from Lamont, AB), and  IGMA Fellow  Janice Crawley (from Winnipeg, MB.)

Cheques are also on the way from  Linda Austin (who will let me know if she will have her sister Brenda's pottery available again this year), Val Corraini, and Louise Zawada.

This is one of the few places where you can still see and feel items for your dollhouse so please support it.

Cheques on the way…

Posted by stalbertmini at 11:34 PM No comments:

Because I was late getting the invitations out to dealers, things are slow but we are coming along. There are several dealers that are regulars that I hope to add soon.

We are going to have our usual GREAT Show and Sale!


Posted by stalbertmini at 12:13 AM No comments:

Wow! Victoria MinLand is with us again this year with six tables of wonderful miniatures!

Alex sent us this email:

Each year, we always have disappointed customers when I don't bring items that they were hoping to see. We only bring about 5% of our items since we have limited space. Could you please let everyone know that's coming to the sale about the deal below? I'm hoping that you can publicize this .

We decided to treat our loyal customers with a special coupon for the 2018 Edmonton Show!

This coupon offers a free pick up at the show, as well as a 15% discount on any item from our website. The discount can even be applied on top of additional sales - such as our "deal of the day" sale!

We encourage you to take advantage of this fantastic deal and purchase items in advance and ensure you get every item you want. Since we have limited room, we will not be bringing all items to the show.