Well, the bulletin boards are finished!

Hint: Think I've mentioned this before but it's worth mentioning again. You can make a quick, easy shelf by slicing two pieces from any kind of molding that you might have on hand and putting a piece of wood across them.

The last of the push-pins after I was finished. I'd guess I used at least couple hundred! 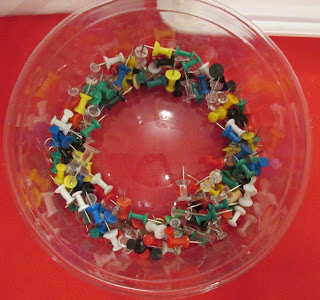 I ended up with two empty shoeboxes; one with several kits; one with empty bags; and one with pizza props, pill bottles and other odds and ends of plastic pieces. 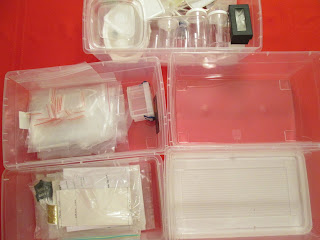 Now the table has been cleared! 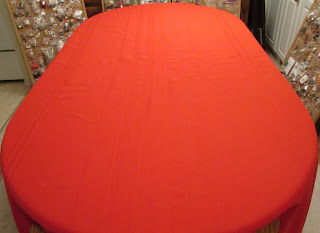 And the boards have been re-hung in the closet. There are 21 bulletin boards in total. 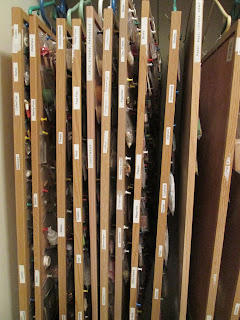 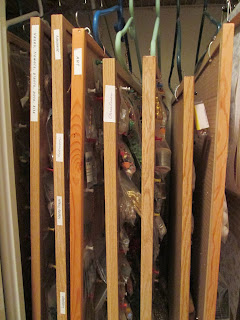 So I'm off to an EXCELLENT start on the cleaning/reorganization! Even in my workroom itself I now have several empty plastic shoeboxes.

The next thing, of course, is to tackle the workroom itself. That's very hard to do when I have the kitchen roombox scrolling about in my head but I'll have to persevere and do the cleaning first. Although I might just sneak the Christmas book in somewhere along the line. ...

Had a scare - my computer monitor wouldn't come on when I sat down to write my blog. But managed to get it up and running somehow.(Big sigh of relief!)

I like it when I can see the light at the end of the tunnel BUT it's also at this point that I tend to start be a bit more careless about where I put things and have to force myself to do things properly.

One of the bulletin boards had pulled out of the frame a bit so had to reglue it in the frame.

Spent quite a while reorganizing the four food/dishes bulletin boards and thinking how everything could be used in a kitchen roombox. Getting excited about using up some of this stuff.

Have to make some changes to a couple boards so better get at it.


Posted by stalbertmini at 7:08 PM No comments:

cleaning up a bit (lighters)

Hanging my head in shame...

On the other hand, lighters have great possibilities for minis:


You can see the fishing rod here.

It's been over a year (well, if I'm truthful) closer to two years since I pulled all my bulletin boards and put away everything that I've tossed in shoe boxes over that time. Some tidying up but not a good clean up.

As you all know, it's incredible how many minis you can fit into a plastic shoebox!!!

Here are the bulletin boards propped all over my living and dining room. 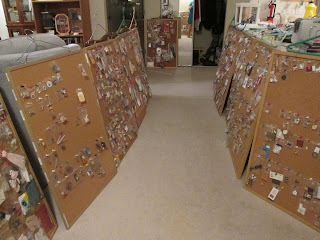 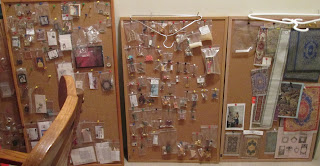 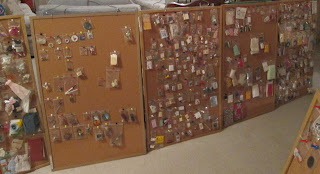 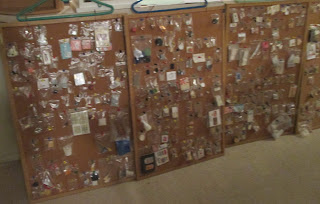 I've never been terribly interested in doing a kitchen roombox but I need to use up at least some of this and I have a lot of kitchen cabinets, etc., and an empty roombox so I think maybe that should be on my "to do" list! Ya think?

I've been working off and on on this since 7 this morning so I am going to call it a day and finish watching the final episode of CSI.

Hopefully, I'll get the bulletin boards done in the next couple days then tackle the "room" itself.
Posted by stalbertmini at 7:55 PM 2 comments:

After the late night on Thursday, it was hard to make it to Leo Nickerson Elementary School by 9:00 a.m. but we made it! And the enthusiasm and curiosity of the students soon swept any cobwebs away.

Andrea Daly is the Art and English teacher. (I worked with her Dad, Gerry Buccini, for years when he was assistant-principal at W. D. Cuts Junior High. When he retired, I made him a miniature of his office - the first miniature of a real room that I did.)

It's the 8th annual Alberta Culture Days and I'm not sure just how long Andrea has been doing it at the school but I think it's my 5th or 6th year. The hallways are lined with tables manned by all manner of artists in every genre imaginable: painters, sketch artists, knitters, musicians, a face painter and, of course, Joanne and I representing miniaturists, to name just a few. In addition, there are workshops going on in many classrooms for a total of 100 participants!

The day began with an assembly with an incredible performance by hula hoop artist, Sandra SaFire, that totally bowled me over! She also slipped in a very good message on making an effort to do something nice for other people that you deal with every day.

Joanne displayed her flower shop, Zuzu's Petals. She took the box out of the case for better visilibility. 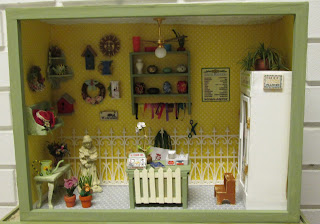 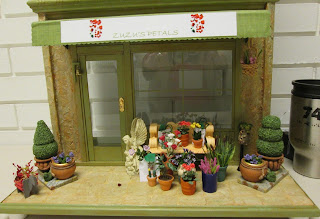 We had a free draw for this "Three Bears' House". The draw wasn't made until the afternoon assembly so we don't know who won it. Andrea will be sending me a picture of the winner and I'll let you know. Several of the children really wanted the draw to be for Joanne's shop. LOL. 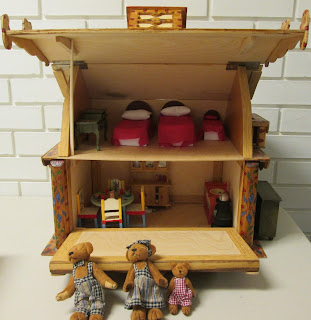 Mid-morning, one of the teachers went to the art room and brought down the miniature of the room that I had made in 2011. It's great fun to watch the students' faces when they realize that "Hey, that's our art room!" 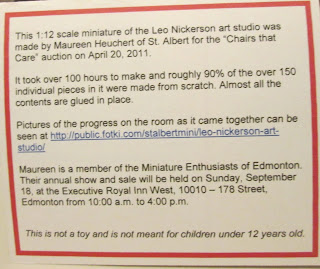 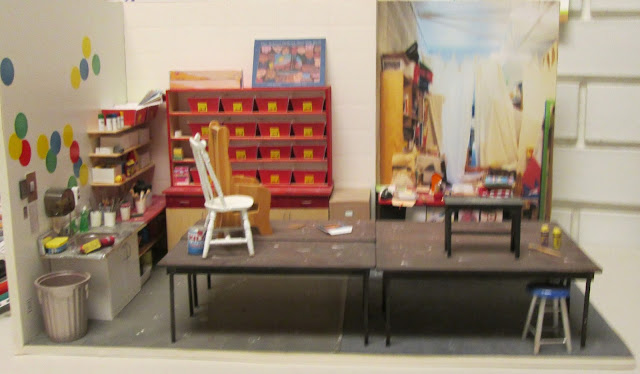 Even got lunch - and what a lunch! Won't even try to tell you everything they served but there were six 6' tables chockful of food and all of it delicious.

We were home by 2:30 for a rest then off to the St. Albert Public Library.

We attended a talk by Dr. Ted Bishop on his book "The Social Life of Ink".  As he spoke, audience members passed around two mortars and pestles, first grinding the galls, then gum arabic into a powder to which was added ferrous sulphite and water (in one instance) and white wine (in another). We were asked to sign his guest book with a stick pen with one of the two resulting inks.

We learned about the history of the ball point pen and Chinese inks and calligraphy.

It was just a very interesting evening! Who knew?

Day One
On Thursday night, Joanne and I had tickets to opening night at the Shoctor Theatre for  the 50th anniversary of The Citadel Theatre in Edmonton. It was a wonderful evening with extras that I hadn't expected.

As the play was to begin at 7:30, there was a lovely ceremony(?) opened by Her Excellency, the Lieutenant- Governor of Alberta, Lois Mitchell, who spoke briefly about what The Citadel has meant to Albertans. She was followed by the widow of Joe Shoctor who spoke eloquently about his dream of a 'Broadway' equivalent of the stage in Edmonton and the ensuing life of The Citadel. There were eight more speakers before the play began.

Joanne was an usher in those very first days of the Citadel (in the old Salvation Army building) and I lived in the YWCA at the time. The "Y" was a block away from The Citadel and occasionally, when the play wasn't sold out, tickets would be send over the the 'Y' and we could attend. (The first show I saw was The Fantasticks and Joanne was an usher for that one.)

As the speeches ended, three actors spoke from the audience about their experiences with The Citadel then we were treated to a flash mob performance of Impossible Dream from Man of LaMancha. (One of the singers actually sat next to me!)

Three minutes later, as promised, (I timed it), the performance of BOOM began. Boom is a performance of the music, culture and evens that shaped a generation from 1945 to 1969. It was written, directed and performed by Rick Miller.

It really has to be seen to be believed. Rick Miller not only plays three different characters: a young man who has been through WWII in Vienna, Austria (plus his parents); the daughter of a a returning WWII Canadian veteran (plus her parents and brother); and an African-American young man (his parents and grandmother). He also performs in character the singers 26 songs that typify the 25 Baby Boomer years. (The recent VW scandal was even worked into the storyline. -  I wondered how he would do that?!?)

The staging/lighting is incredible - and  make the show!

When I read the original write-up in The Edmonton Journal, I wasn't too sure how I would feel about it. But this was definitely a standing ovation performance.

Rick Miller ordinarily stays on stage so attendees can give him their own memories but due to Her Excellency's attendance, that didn't work last night.

After the performance, there was a champagne reception. We stayed for a short time and Joanne was able to speak with Mrs. Shoctor and tell her of her memories of the original Shoctor Theatre.

Posted by stalbertmini at 11:00 PM No comments:

A neighbour has asked a couple times if I would make a Christmas scene for a friend of hers. I've been hesitating but when I was reorganizing my living room, I came across a lovely little vignette that I had received from Lorry in a club Christmas gift exchange. It gave me a starting point so I decided to go ahead.

First, a Chrysnbon chair: I coloured it with a permanent black marker: 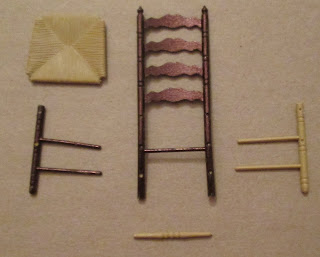 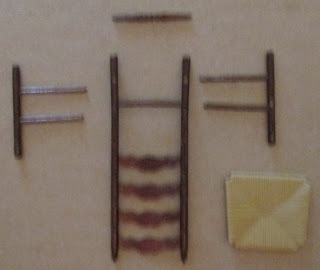 Then put it together. 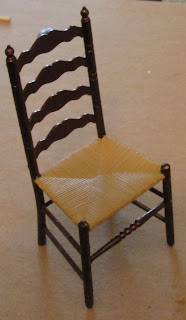 Next, I had to find a container for it. Almost everything I tried wasn't deep enough until I came across this hollow 'book' that I had picked up at Winners some time ago. It will work well and can be closed to keep out dust. 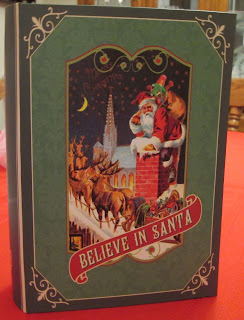 Have a start on it. Still have to do some sort of wall treatment and hang some garland and a wreath. And dig out all the leftovers from the Christmas shop to add some interest. 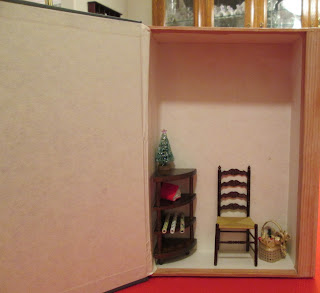 All that will have to wait until the weekend as Joanne and I are going to a play at the Citadel tonight then will be at Leo Nickerson Elementary School tomorrow for Alberta Art Days.
Posted by stalbertmini at 2:14 PM 2 comments:

Showed great restraint this year! Only spent about $30! Maybe there is something to be said for downsizing. LOL

You may remember this chandelier from last spring. It was a kit by Phyllis Tucker that I was so frustrated with. Hoanie from Live a Little Miniatures (a club member and dealer at the Show and Sale) took pity on me and assembled it for me. Didn't she do a beautiful job? I still have to add the candles to it and decide where to put it. Thanks, Hoanie! 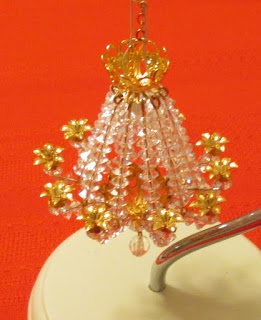 Posted by stalbertmini at 1:33 PM 2 comments:

Some more pictures from the Show and Sale 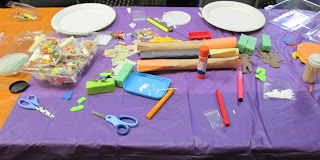 Posted by stalbertmini at 1:15 PM No comments:

Some of the displays from the Show and Sale

The thing I love best about the show and sale is the display of the club project. These are all based on the Joanne Swanson flower shop project in the Miniature Collector magazine. Most of the projects show the inner box from the project up above the outer portion so it's much clearer.

Fifteen projects and all different! 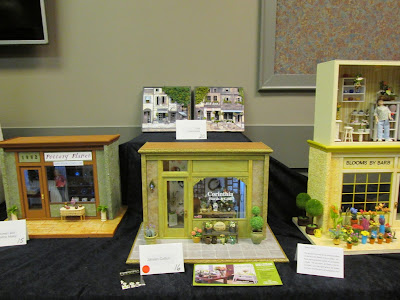 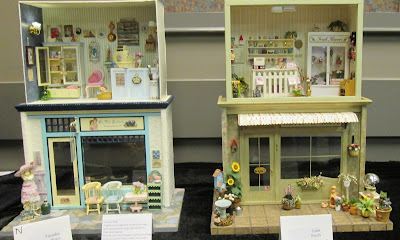 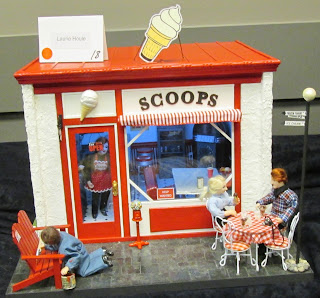 This is the winner in the doll house category! Marg made this for her grand-daughter.Absolutely loved it. 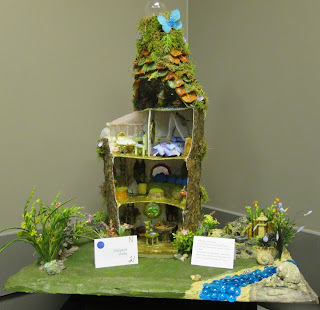 Posted by stalbertmini at 12:35 AM No comments: