More sadness in our family

DS Shirley and DBIL Grahame's beloved furchild, Drum, went to the Rainbow Bridge today. He was 15 and in great pain so his passing was, perhaps, a blessing but he has left a hole in our hearts. 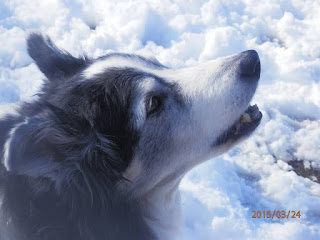 We had a great break in the weather: high of 23C but soft rain off and on all day. We should get a couple reasonable days then it will be hot again.

Hope I can get my act together and do something mini.
Posted by stalbertmini at 8:48 PM No comments:


My dd Leanne and dsil Robert lost their younger rabbit furdaughter on Thursday. It is SO heartbreaking when your children are hurting so much and you can't do anything to make it better.

SO stupid! Early this morning I decided to run a few errands before the heat got too bad. I wanted to deposit a cheque at the bank/withdraw some cash; get my eyeglasses adjusted; pick up a bicycle lock for my storage unit; and get some sunscreen to deal with the sun while I go out in the next while.

It's 1 km downhill to my bank. At the bottom of the hill, I realize that I do NOT have the cheque for deposit! It's not an emergency deposit so I decide to just finish off the rest of the errands but I'm really angry with myself. BIG TIME stupid!

Went to Pearle Vision. Kirsten (hope I got that right) did an incredible job of adjusting my glasses. (They were so out of whack that they were 1/4" higher on one side than the other.)

We have a condo block party tomorrow (sponsored by Crimestoppers and the City of St. Albert). Quite looking forward to it but concerned about the heat!

I DID buy a portable air conditioner a month ago so things are much more comfortable in the condo. But somehow just knowing what the temperature is makes me REALLY lazy! Don't seem to get anything done.
Posted by stalbertmini at 9:57 PM No comments:

We had a very enjoyable final MEE meeting of the year tonight. (I say 'final' meeting but we have two workshops coming up over the summer: a chalk paint workshop on July 28 and a wigging workshop in August.) And, of course, we start up again in September.

Our nominating committee for the new executive did its usual great job and a new slate of officers (except the treasurer who has one year left on her term) was elected by acclamation. Joanne is our new president, I'm VP (not too sure how that happened LOL), Lucille stayed on as secretary, our former president is the workshop chairperson (something she has done informally for years). Sunni and Teresa d are the membership people.

One of Joanne's first items as president was to give Tina a free membership for the next year in thanks for all her efforts over the years. I seconded that and it passed unanimously. As well it should have!

The June MEE meeting is our 'garage sale' meeting. This year I actually put some things together for that! I had a bankers box of various things - mostly freebies - but some older bits and pieces of furniture that I was selling quite inexpensively. There were several things that I gave to Sunni for her Children's Table at the show and sale.

I didn't have a great deal of cash on me but it worked out well. Between the things I sold and the discount that Rosalle gave members, I could buy these things and still come home with something in my purse.

Rosalle had two beautiful afghans that she was selling:

Posted by stalbertmini at 11:51 PM No comments:

Back to Vern's Attic

I have to finish the attic by the end of July when Sean, Julie and the grands are coming for a visit. They're travelling with the trailer so they'll have a way to transport it home.

BUT I have to pet/house sit for Leanne and Robert for two weeks in July so I have to schedule the work accordingly. At this point, the plan is to wire, finish the walls and ceiling, and shingle the attic at their place. I'd like to get all the contents done here before then as I don't want to have to deal with packing up all the zillion things that I would need to work on them.

These are the things that I have so far to go in the attic. 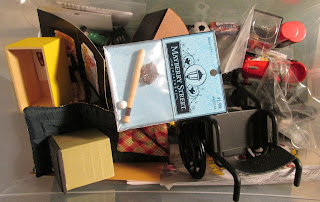 Tonight I took a lot of pictures of a few more things that I want to include.

Vern worked a lot in the NWT and over the years bought some Inuit art. There were four prints in particular that he purchased. Sean and Leanne have two of them in their home and I have two in my living room (and in the Bombay house in miniature). So, I'll miniaturize the two that I have for the attic. 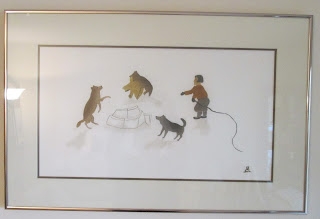 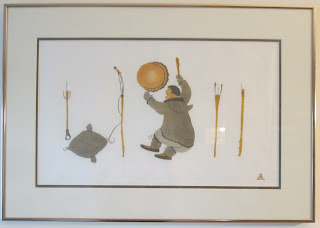 I've resized these and printed them on photo paper. Tomorrow, I'll add the silver frames.

Sorry I can't rotate this....but it's a poem I had framed for Vern years ago. 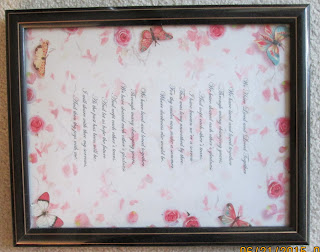 Also some of his absolutely favourite Christmas gifts from Sean and Julie were the photo calendars that they gave us. So I'm attempting to copy the 2011 one for the attic. This is going to be hard but I hope that I can manage it.

I want to include a book with the attic that tells the story of each piece so that may be something that I can work on at Leanne and Robert's.

For those of you who aren't familiar with the history of this project, my DH Vern died in July 2011 when Jonah and Holly were 5 and 3. In the fall of 2011, our club project was the attic. Originally, I had no intention of doing it until our club president, Tina, said she was doing hers in memory of her late husband. I sat down one night and came up with a long list of things that represented Vern and Leanne added more things to it. Neither Sean nor Leanne wanted the attic for themselves but I decided that it would be a good way to show Jonah and Holly a bit more about their Grandpa Vern.

Posted by stalbertmini at 8:30 PM No comments:

Oriental vignette - or why my stash is SO big!

You may recall my telling you about how much 'stuff' I had left over after I finished my Christmas shop....probably a half cubic foot of things (or enough to make at least one more shop LOL). And it all went back into my stash.

YEARS ago I decided to make an oriental room. I had nothing specific in mind so just started collecting for it. Originally, it was to have gone into a regular roombox (roughly 15"w x 10"h x 11"d) until I found this great lamp with oriental lines at a garage sale in Bowden, AB. 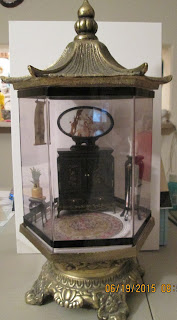 I love it. The container is really perfect and the contents are quite understated.

BUT, as with the Christmas shop, I had a lot of stuff left over.


I ended up giving this all to my upstairs friend, Barb R., who thought she might do an oriental room for one of her daughters. Well, the other day, she changed her mind about that and returned everything to me. in case I wanted to sell some of it at our MEE garage sale next week.

I do have a lot of things for the garage sale this year but don't think that the oriental things will become part of them. I'll just stick them in the shoebox marked 'Oriental room" and tuck them away. There's enough there for a great oriental room!

And that's how my stash just grows and grows!

That's my story and I'm sticking to it!

DS Carol and DBIL Fred will be here tomorrow so hope to spend some time with them.
Posted by stalbertmini at 9:21 PM 2 comments:

I'm sorry I haven't been posting lately....RL has gotten in the way. VBG

Here are a couple great sites that you might want to check out:

Miniature Collector Magazine has its Kids Korner. Lots of tutorials that, while they are directed at younger miniaturists, are great for all of us!

The Miniature Time Museum also has some wonderful tutorials!

Lots of fun and good ways to start.
Posted by stalbertmini at 1:54 AM 1 comment:

Some great minis for sale!

Sorry I'm so late with this information but I was in Ontario with my grandchildren's first communion. It was a wonderful trip with a wonderful family visit! A family member even taught us how to make ceviche as part of my granddaughter's study of Peru.

Hoanie's e-bay address is  http://stores.ebay.ca/kailusky66?_rdc=1 In addition to her wonderful lighting fixtures, she is also doing some great Christmas things! Hope you'll take a look!

Jo-Ann Shaw also has some of her great work available on e-bay. She also has a sporran available for those of you who are Scots. (Don't think that link will work unless you're a member of Canada Minis.) But a lot of her incredible work can be seen here.

Will catch up later!
Posted by stalbertmini at 11:33 PM 2 comments:

Jennnifer of Little Day Miniatures taught a wonderful licorice allsorts tutorial at our workshop last night. She's a great teacher and everyone had a lot of fun. I'm not a big fan of fimo but even I managed to make some presentable allsorts VBG. I just walked around and took some pictures of some of the finished product. 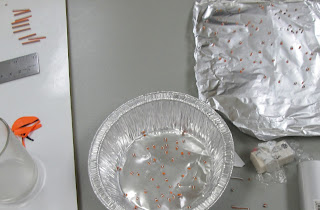 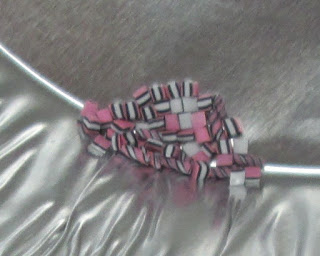 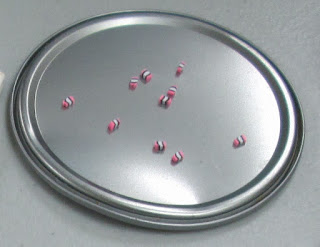 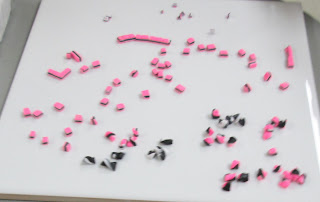 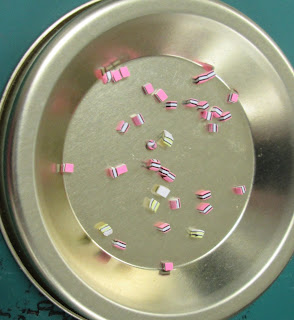 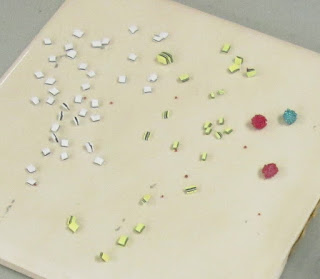 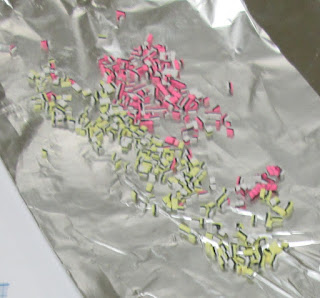 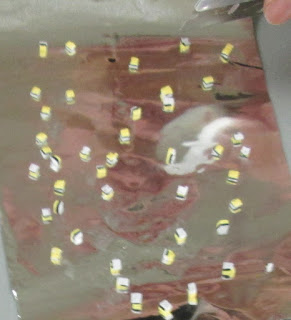 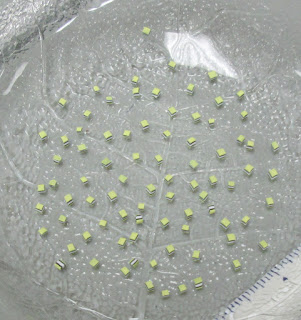 Hoanie from Live a Little Miniatures joined us last night. She makes beautiful electrified chandeliers and other lighting fixtures and will be a dealer at our Show and Sale in September. (She has also volunteered to put together my Phyllis Tucker chandelier kit that I bought in Chicago. Bless her!)
Posted by stalbertmini at 11:03 AM 1 comment:

When we got together at Shirley and Grahame's for dinner on Sunday, Marie had an apple box of Christmas decorations for us to go through. I was able to say 'no' to most but have to admit that I couldn't resist a few of them!

Posted by stalbertmini at 9:41 PM No comments: