So if you can email me and give me more information, I'll try to send you what you want.


Posted by stalbertmini at 1:16 AM No comments:

First some pictures from our first day:

Here I am as Anne of Green Gables:

I'm so glad Cheryl talked me into this! 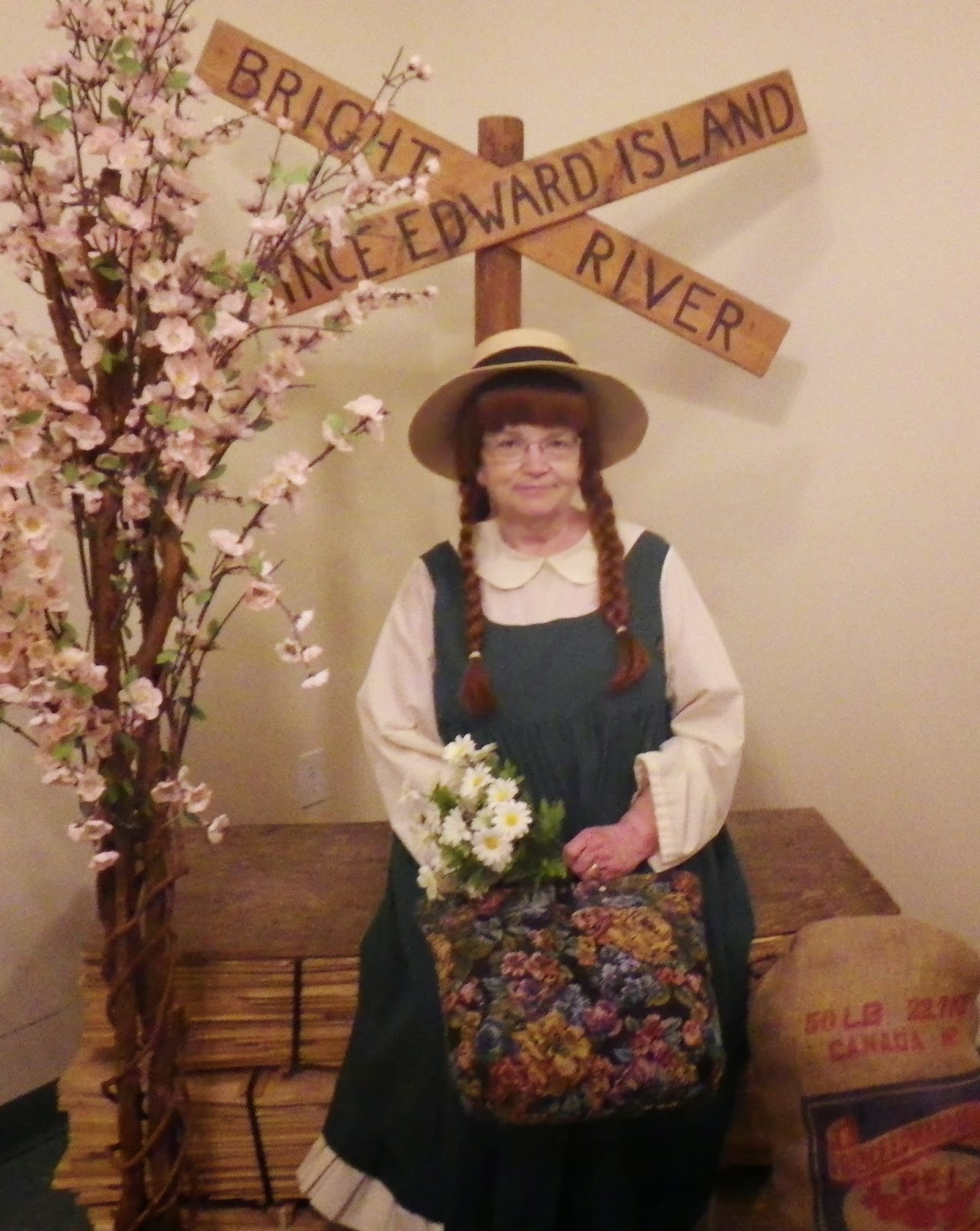 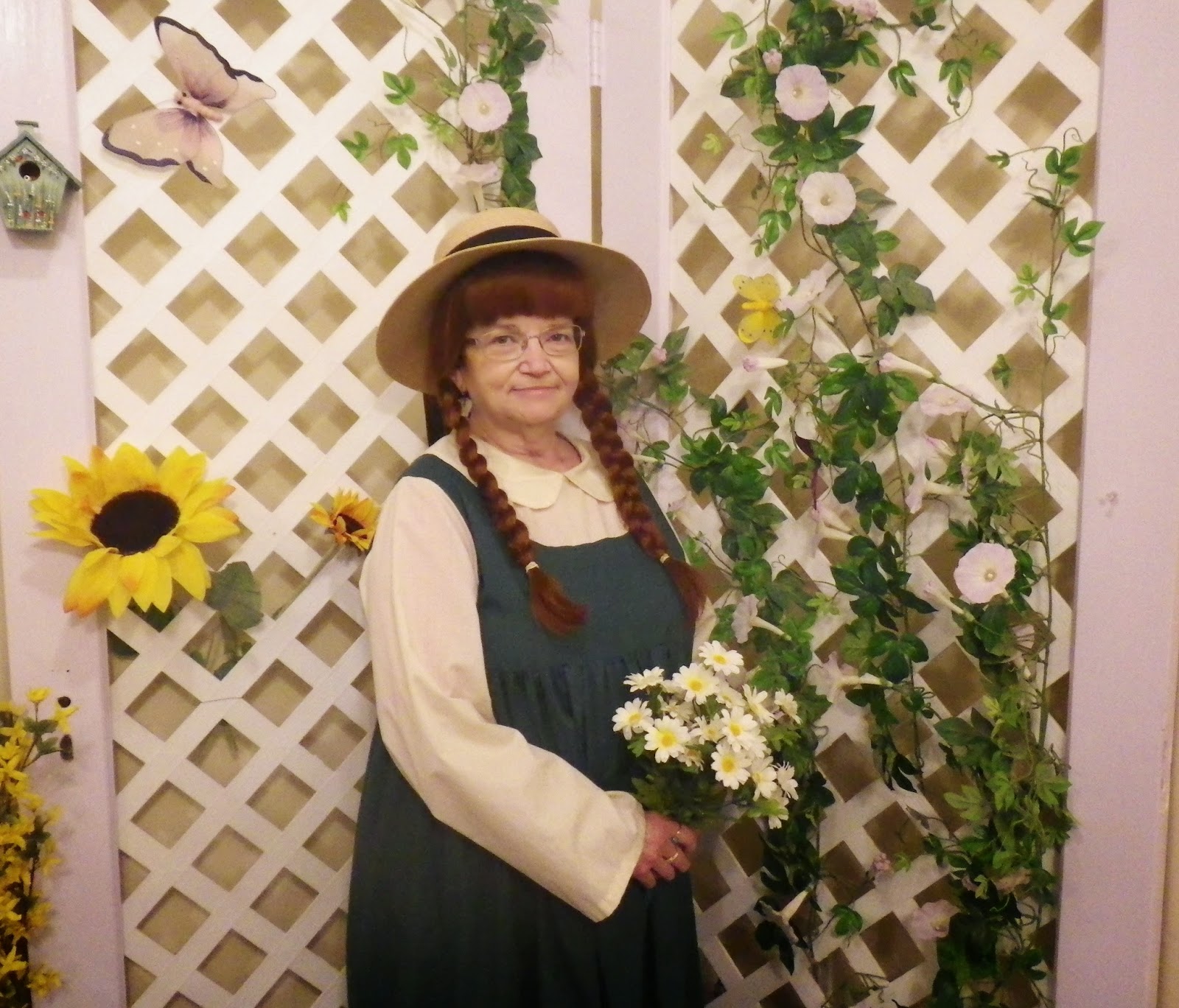 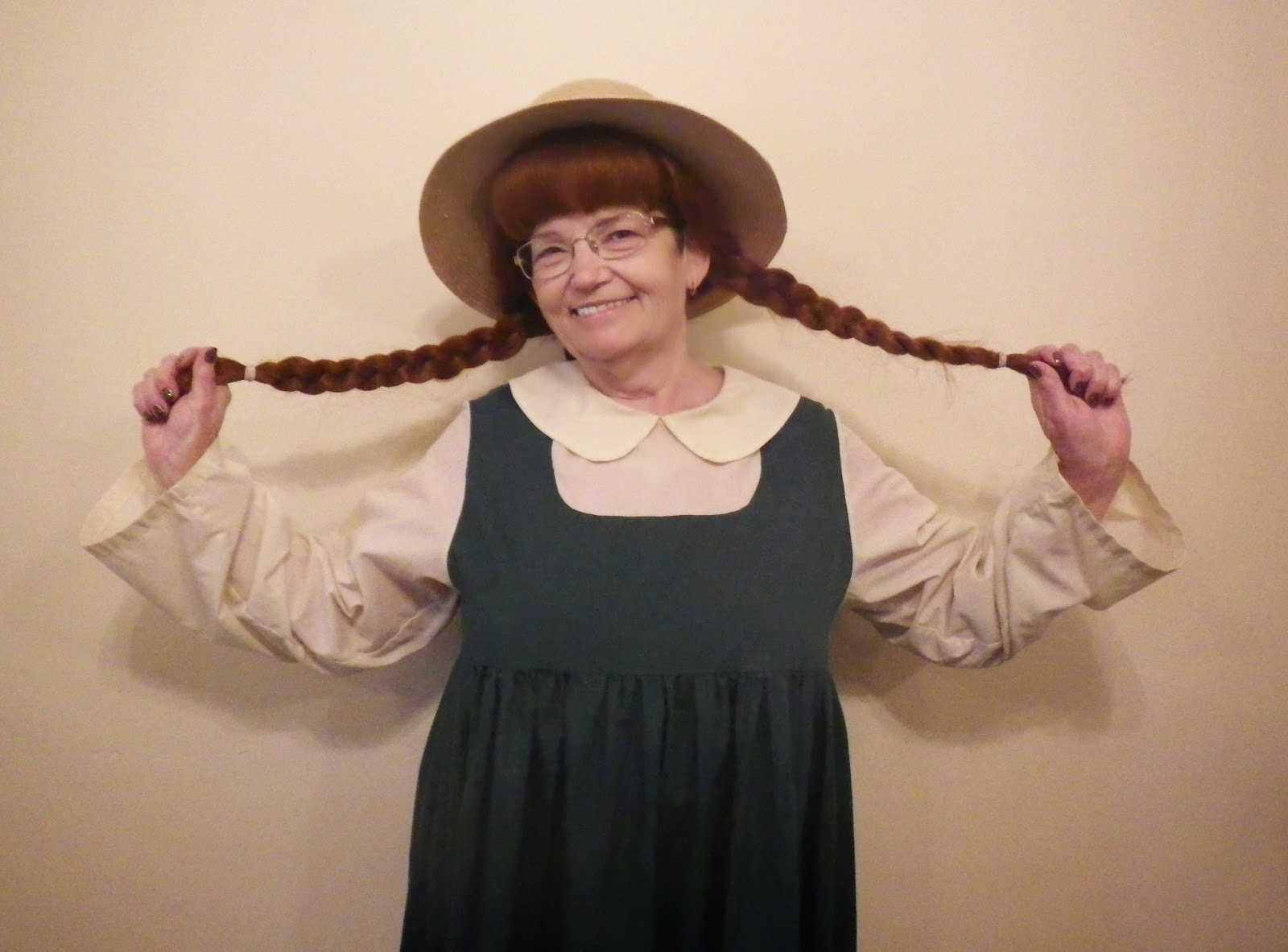 Oh, my, this was such a great experience! Cheryl's twin, Charlene, has a miniature horse, Zephyr! And I got to ride in the cart behind him! 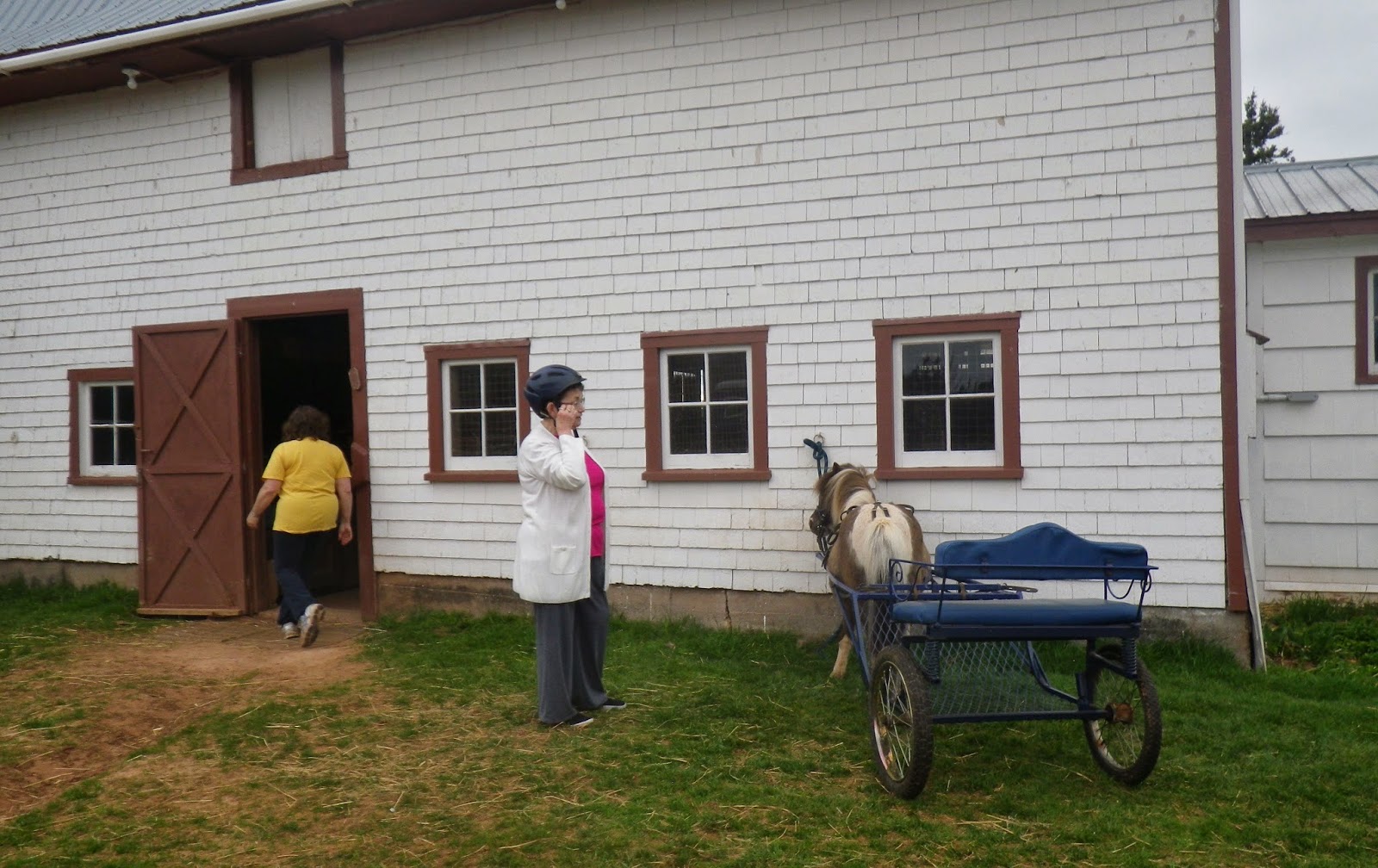 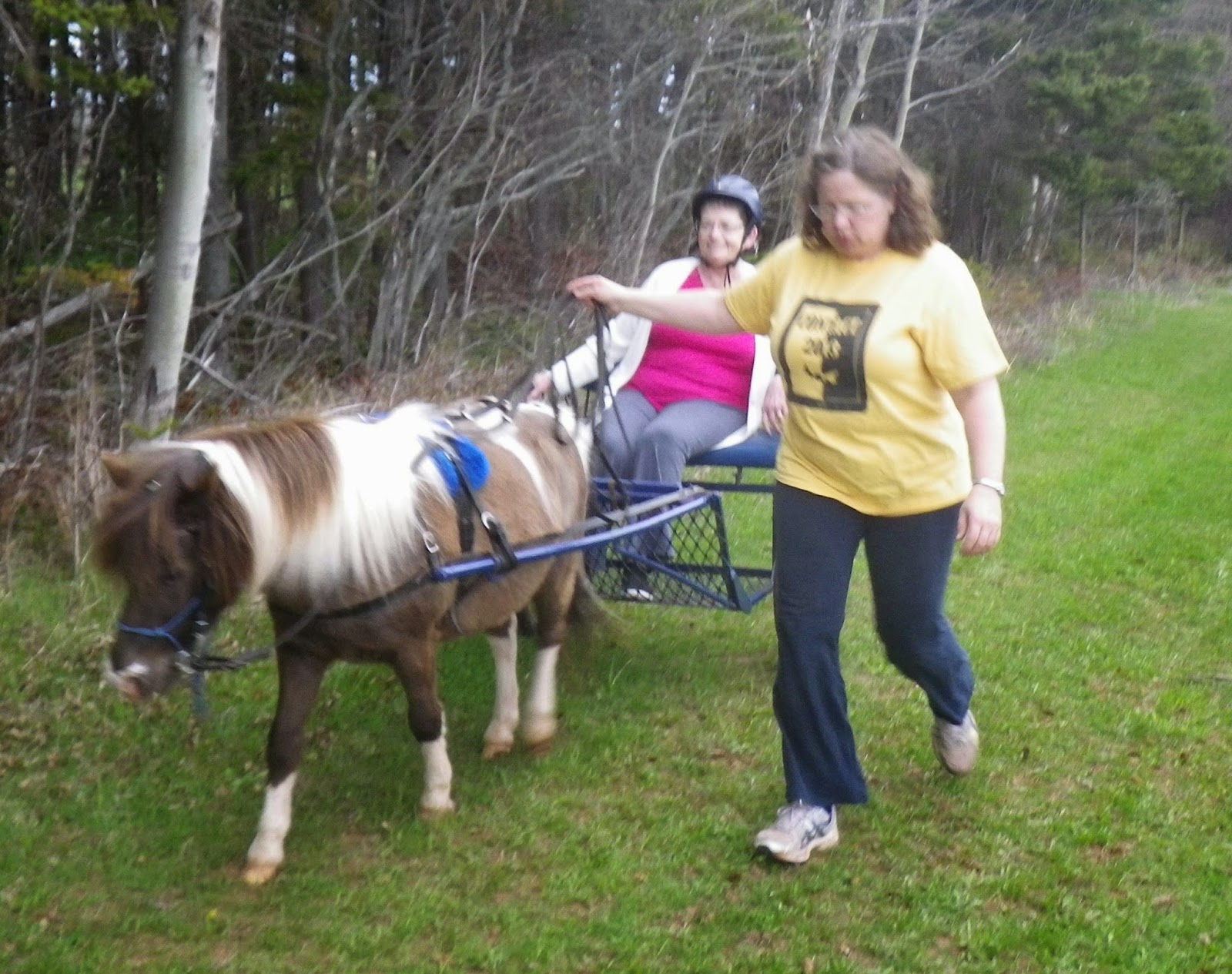 After this great fun and and dinner, we went back to Borden (at the end of the Confederation Bridge) and met our hosts, Marilyn and Bruce D.

I don't know what it is about miniaturists that we have this bond somehow. The first time I met Cheryl was when I arrived in Halifax seven years ago (hard to believe that it's so  few years ago) and we felt like we had known each other forever.

So we returned to Borden and knocked on Marilyn and Bruce's door and it felt like we had known them forever. An absolutely wonderful couple! Both very proud of their Irish heritage (Bruce is the Past-President of the Irish Canadian Cultural Association of New Brunswick and Marilyn is the Assistant Editor of The Shamrock Leaf - its newsletter) and are off to Ireland in June for another month there.

They have me wondering about my own Irish heritage on my father's side. I have a lot of information on the English (maternal) side of the family but none on the paternal side.

The rest of the trip tomorrow.

I still don't have all the pictures from PEI so that will have to wait again...

But I must show you the roomboxes that I purchased from Jane and Paul's granddaughter: 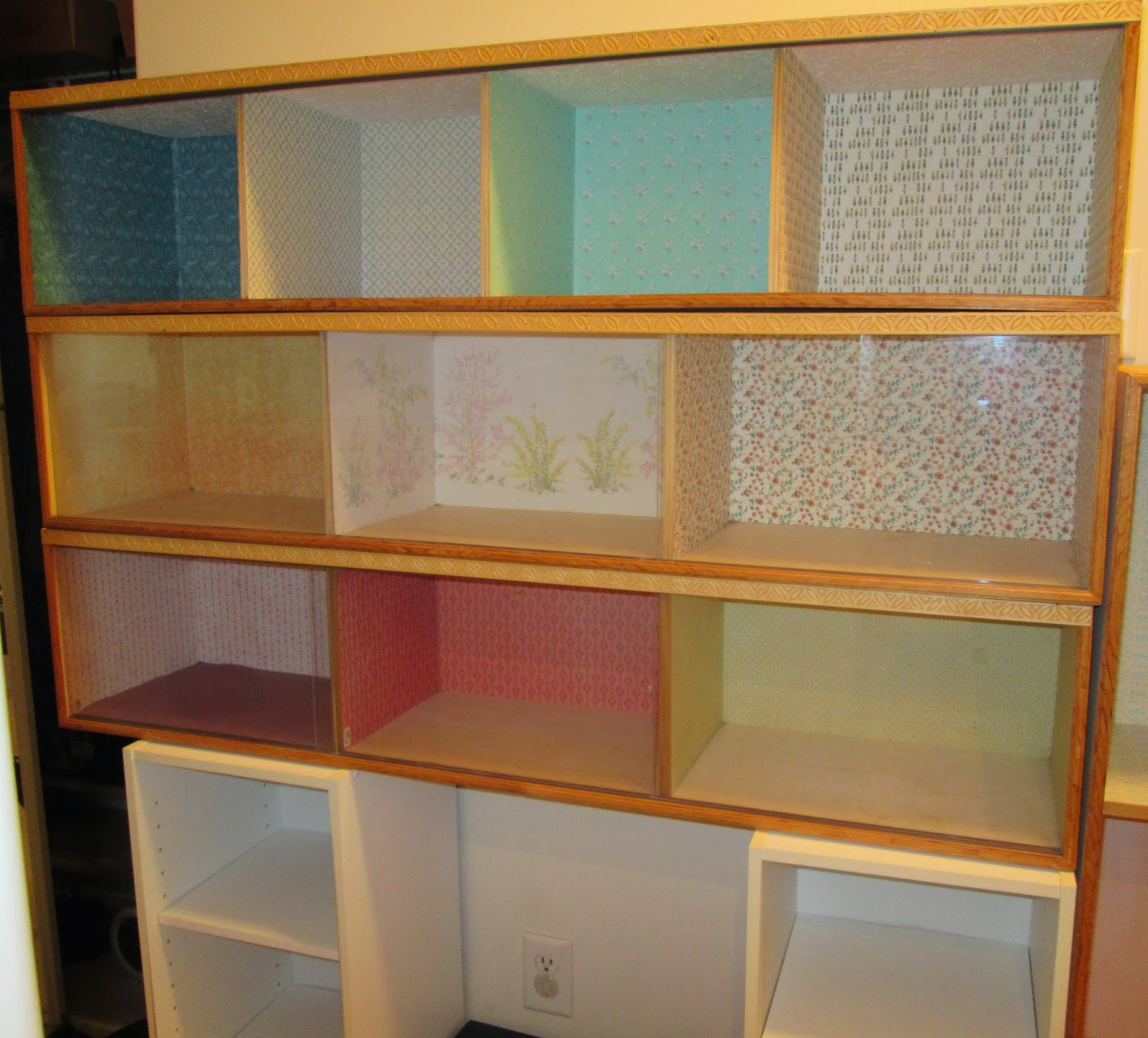 I have temporarily put them in the entryway of my condo on a couple shelving units that were in my second bathroom. (Picture taken on an angle as can't get enough distance straight on)

Have to think a lot about how I'm going to work with these wonderful rooms!

Sunday morning we headed out to PEI.

Cheryl insisted that I pose by the Blueberry at Oxford, NS 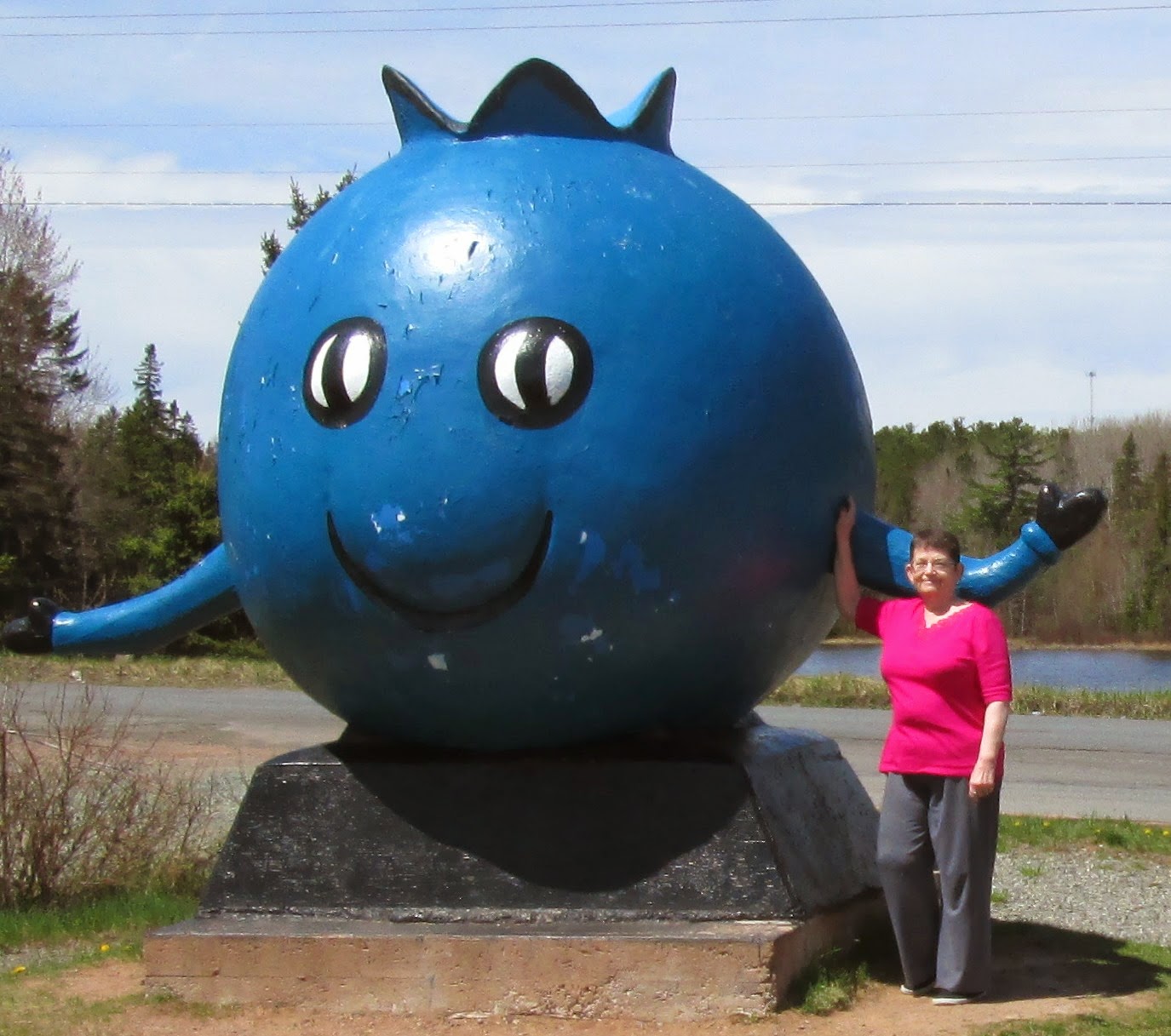 and then again as we entered New Brunswick 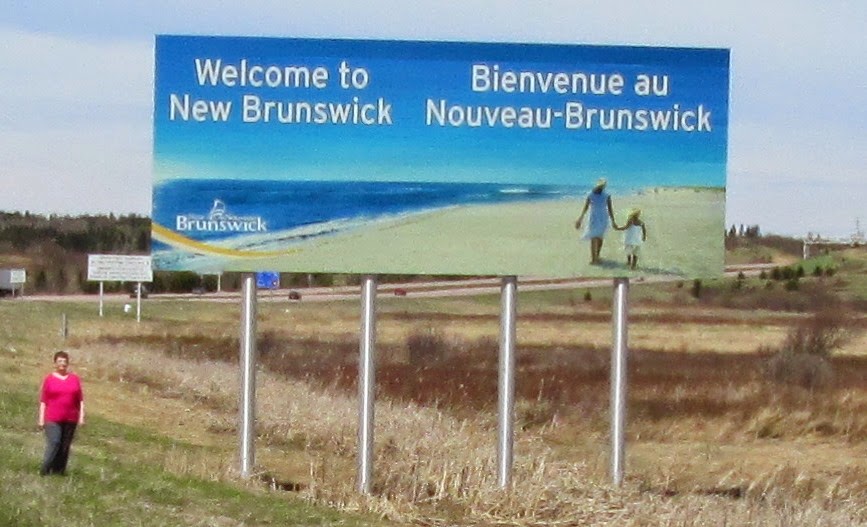 So I HAVE been in New Brunswick but only to get to PEI so that doesn't really count!

But here on in, I didn't take many pictures...Cheryl took some great ones but it'll be awhile until she forwards them to me so you'll have to wait for the goodies!

Confederation Bridge is an incredible experience: I think 8 miles connecting NB with PEI. Unfortunately by car you only catch glimpses of the ocean so I don't think you get the vision of the incredible trip you are taking. Cheryl took me to see a mural in Sobey's in Summerside (I think) that depicts the winter crossing of the strait years ago. Heart-rending.

When we arrived in PEI, we stopped at the shops at the end of the bridge. First stop was Cows Creamery for some really excellent ice cream! Then we crossed the highway to (shoot, didn't write down the name but think it was Cavendish Pottery)...In any event, great shop!

I bought some geodes (no idea why as I already have some great ones in my stash) and some wonderful starfish (think I may do a nautical scene for DBIL Grahame - have LOTS of nautical stuff in my stash).

The highlight here was the "Anne of Green Gables" photo studio! Costumes, wigs, props and settings. It was particularly fun since we were the only people there and the wonderful gentleman spent about twenty minutes dressing me as Anne and posing me in front of the scenes.

We went to Cheryl's twin's, Charlene's home then went out to the farm where Charlene's miniature horse, Zephyr, is boarded. Back to Charlene's and finally connected with her and returned to the farm to visit with Zephyr. What fun! Charlene harnessed the cart up to Zephyr and took me on a wonderful ride. (pictures to come)

Charlene, Cheryl and I went for dinner then Cheryl and I returned to Borden to meet Marilyn and Bruce with whom we were spending our nights in PEI.

More about these incredible hosts in the next post....


Posted by stalbertmini at 12:19 AM No comments:

While in Bloomfield on Mother's Day, we did a bit of shopping and I got this wonderful windchime for DS Shirley for their place at the lake. It looks much better in  person and I absolutely fell in love with it.

I like to travel light but since I had a Teddy bear for Holly and the Harry Potter room for Jonah, had to take a big suitcase which turned out to be a blessing as I ended up bringing a whole pile of things home from the Maritimes. VBG

Arrived in Halifax shortly after 6 p.m. on Tuesday. Cheryl and I spent the evening catching up.

Cheryl had been  given a box of miniatures by a woman whose mother had collected them but had no interest in them herself. On Wednesday, we had a fun time sorting through them and deciding which we wanted for our stashes. 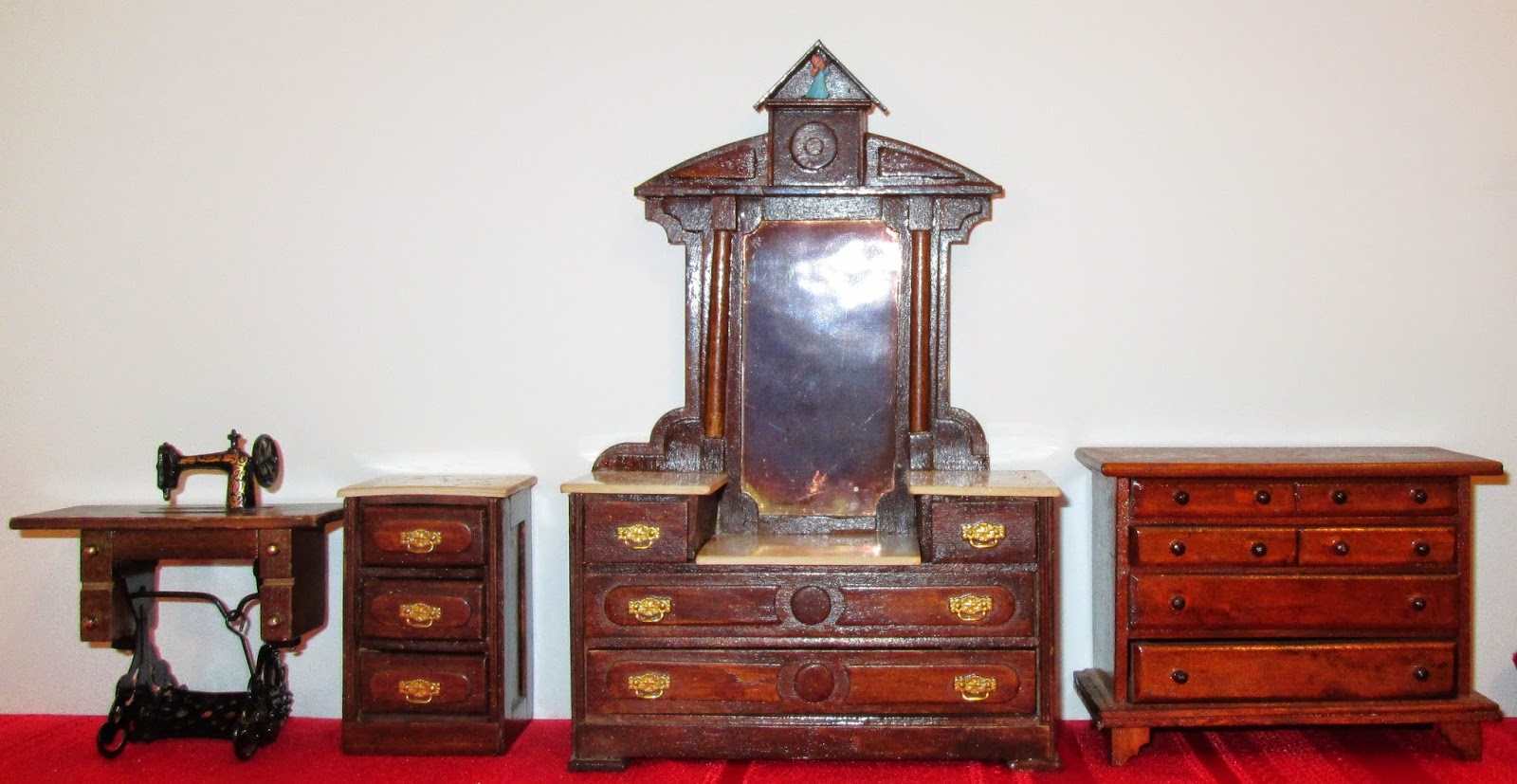 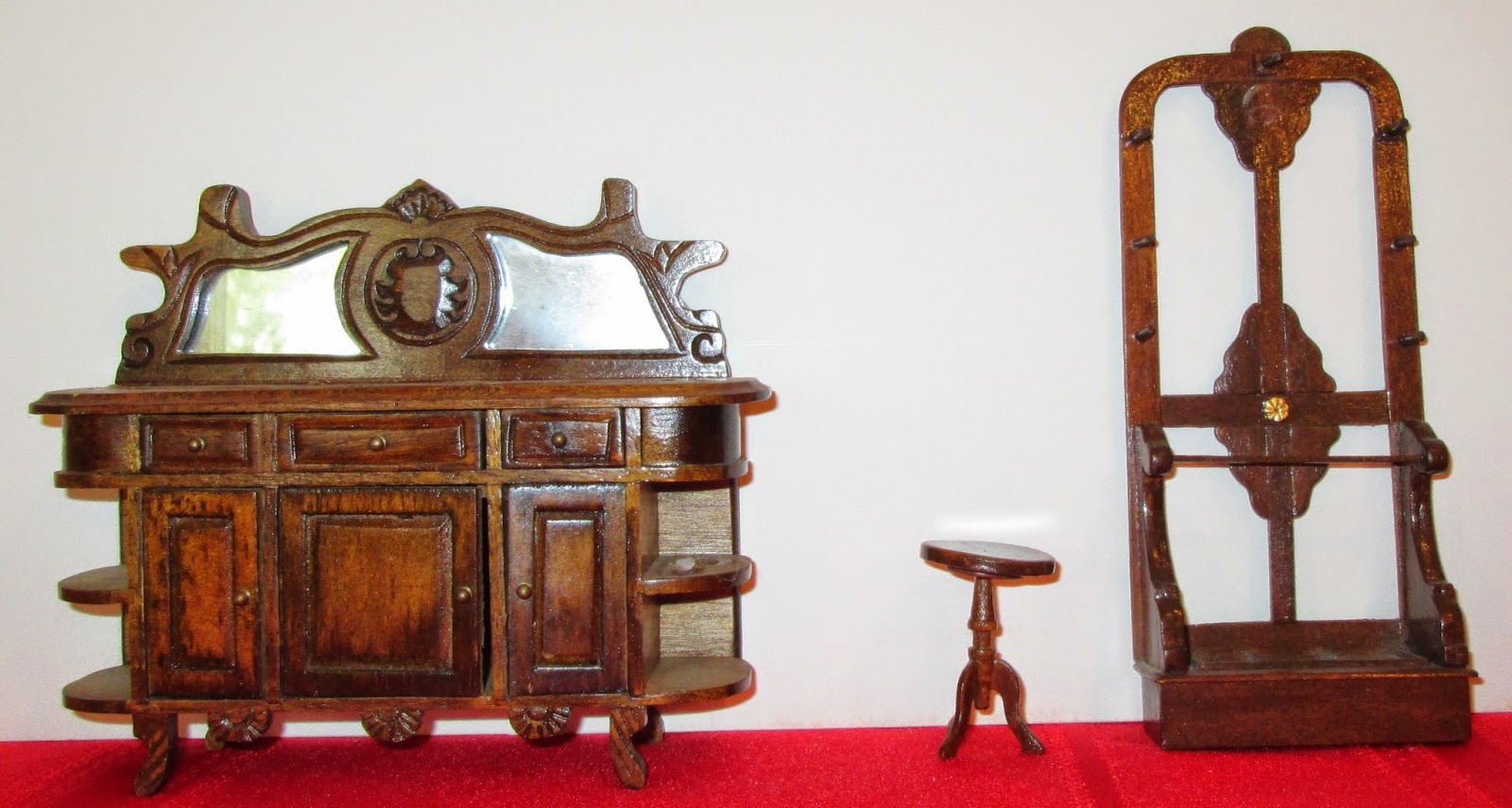 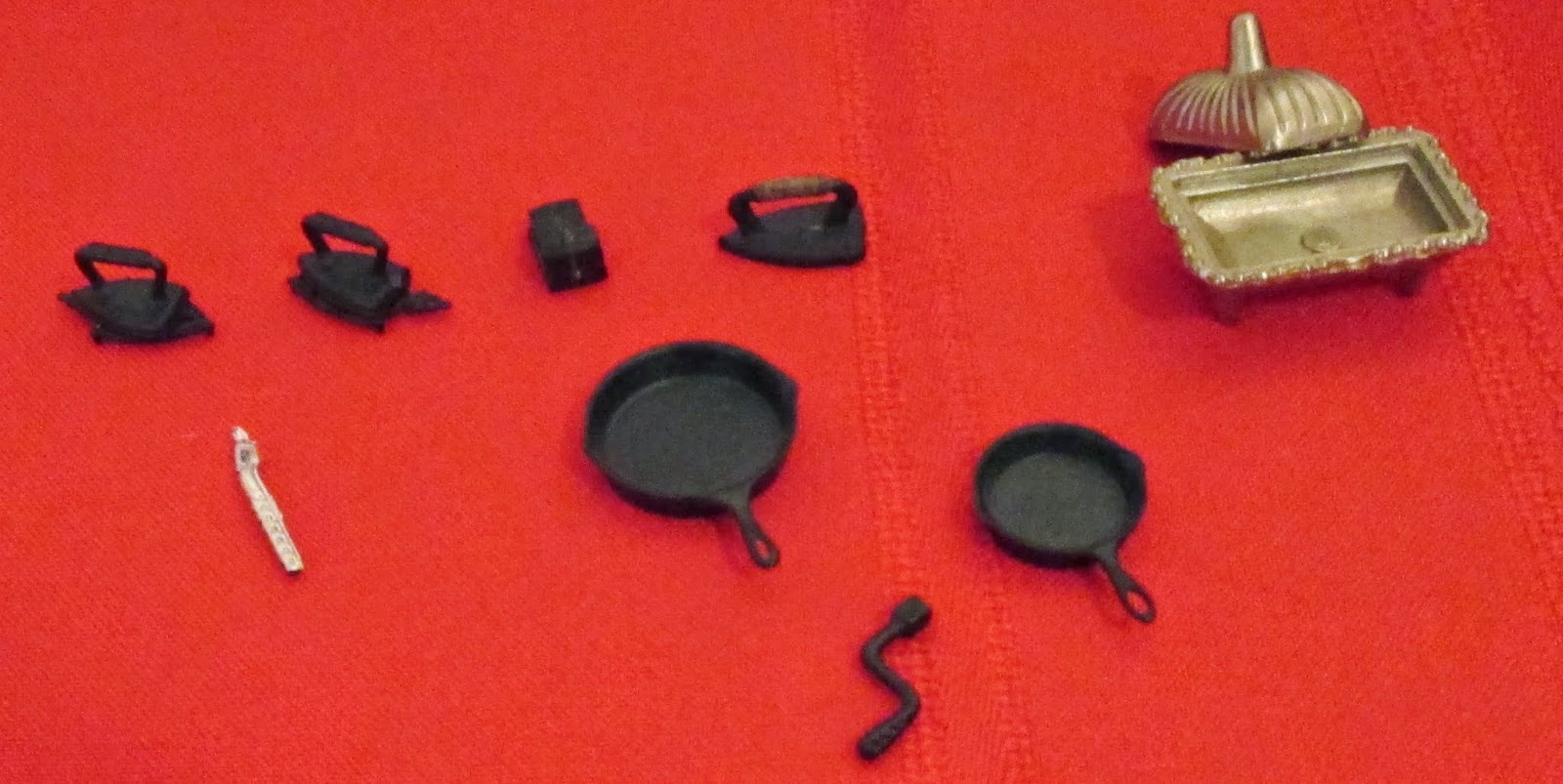 David had put Cheryl in charge of selling his late wife, Ruth's, jewellery. Most had already been sold but there were still two ziploc bags left so I had to check that out also. From all that I bought, you would never know that I seldom wear jewellery! (Mind you, some I bought as gifts for family.) 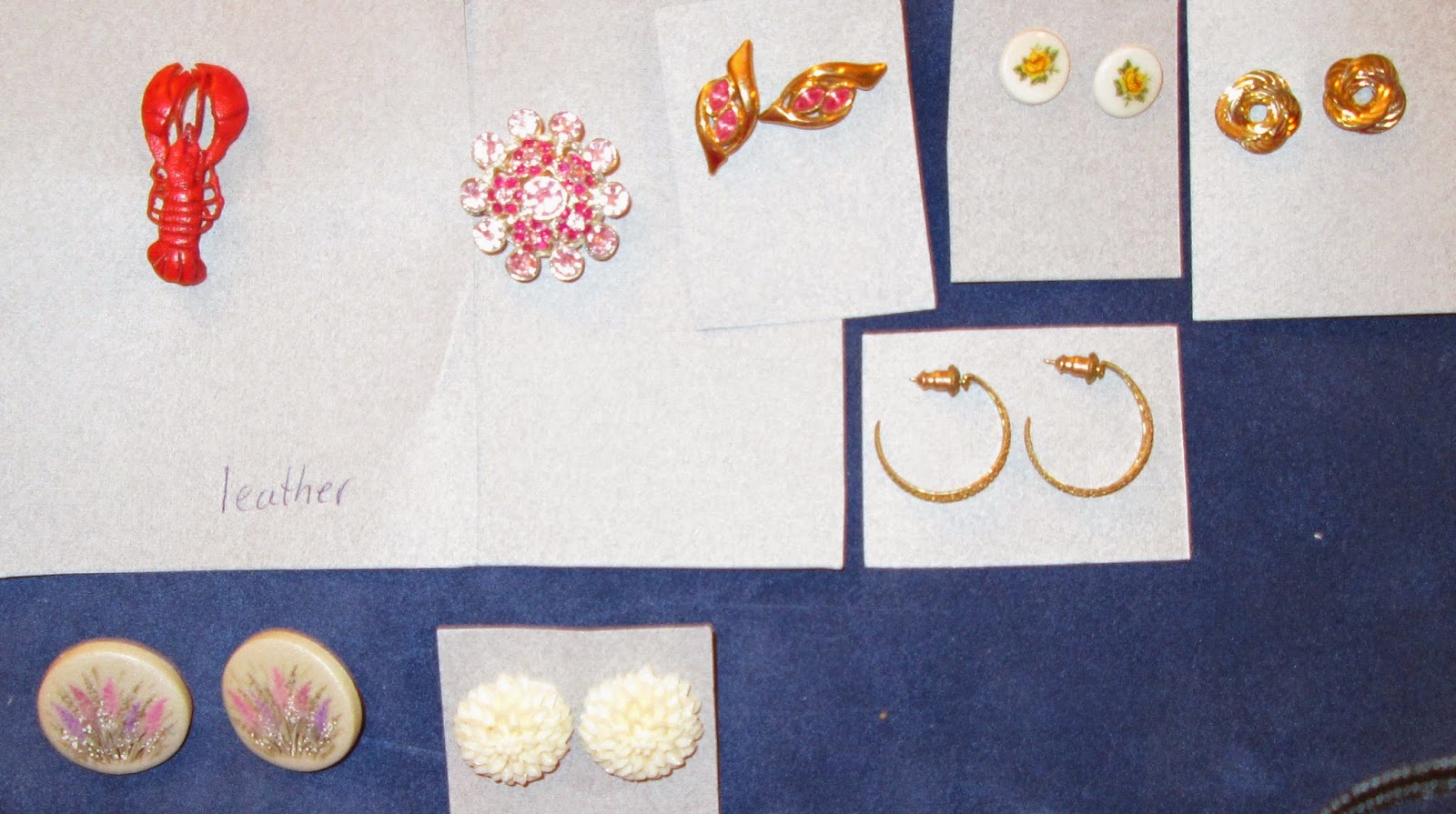 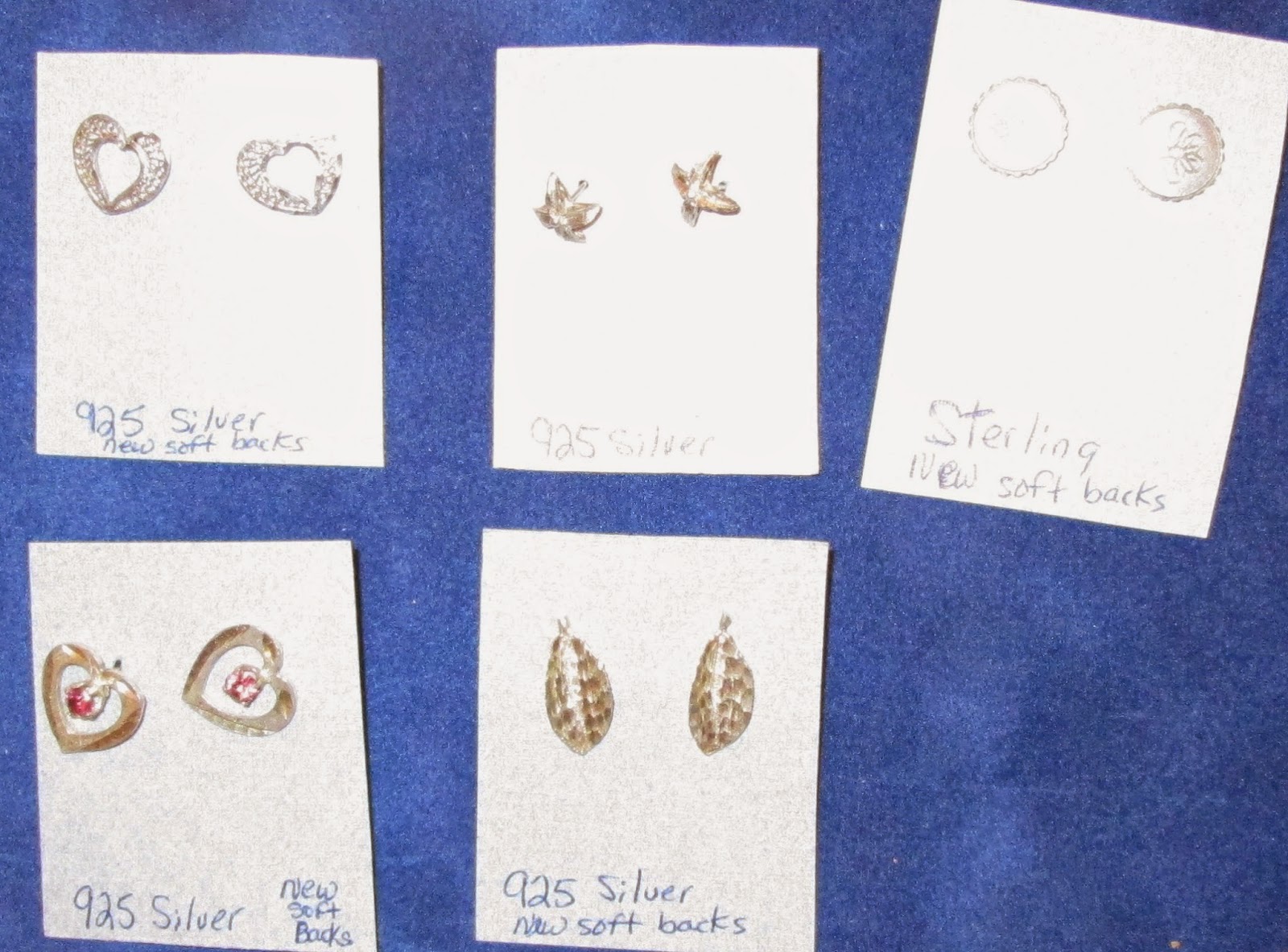 On Thursday afternoon, Wendy McD joined us for some mini-time. She and Cheryl were going to work on teacup scenes (didn't work as they had hoped) and I cut out some mini-books. Joanne S. joined us for dinner and brought some of her beautiful ceramic and porcelain pieces. She also brought the beautiful marquetry table she made for auction at Guild School at Castine which she is attending this year on a scholarship. Joanne is a very gifted artist in several media. You can see her work at http://www.kilnworks.ca/index.html and her minis at http://kilnworksminis.weebly.com/

Also on Thursday, received an e-mail from a grand-daughter of Jane and Paul Barabash who for years had The Toy Shoppe, a miniature shop off Whyte Avenue in Edmonton. The family was selling off the remainder of the stock from the store. Among the offerings was a three room extended roombox for $40 - made an offer and got it! Joanne agreed to pick it up for me on Saturday and even delivered it to my condo!

Friday afternoon, Cheryl and I treated ourselves to manicure/pedicures. Cheryl got bright blue toenails but pale fingernails - both with sparkles! I was going to go with my usual boring red but somehow (yeah, Cheryl) ended up with burgundy brown nails and toes - also with sparkles! Got lots of compliments everywhere we went so guess the choices weren't TOO bad.

Marilyn, a member of Canada Minis, had invited us to stay with her in PEI. The discussion about our stay included references to wine and chocolate so on Saturday we went to the Lindt store and stocked up on the chocolate part! Also went to Dollarama where I picked up three packages of computer labels (haven't been able to find them here for quite some time), some 4" x 4" ziploc bags and two burgundy chair cushions (could only find four here).

I'll split this post here and continue with our trip to PEI.


Posted by stalbertmini at 10:29 PM No comments:

A quick note from Peterborough

RL got so hectic before I left that I didn't have a chance to tell you about Joanne's and my trip to Lee Valley to see a demonstration of their LED lighting tape (HUGE mini possibilities) and a couple other things we picked up...or our trip to the Doll Show in Calgary. Hope to cover those when I return.

Great flight to Toronto (considering I was up at 4:00 a.m. and travelling on four hours sleep! Was here for Jonah and Holly's piano recital and spent a wonderful Mother's Day with Julie's family who are just the best!

Leave tomorrow for Nova Scotia to spend time with Cheryl. Hope to get to see some old mini friends and have to plans to meet a new one in PEI. Doubt that I'll post again until I get home.
Posted by stalbertmini at 11:41 AM 1 comment: