If you're working on a project dated between 1937 and 1998, you might want to check out this site.

There are almost 60 Christmas Wishbook catalogues from the U.S. and Canada.

I looked at the 1957 Simpson-Sears Christmas Wishbook and it would serve as a guideline for just about anything you would want to put in a room/house: toys, games, fashion, furniture, china, silver, kitchen appliances, accessories, jewellery. You name it.

For those of you who want to be historically accurate, this is a treasure trove.

For those of us who just want to bring back memories, it's a joy.

Either way, I hope you'll check it out and enjoy wandering through memory lane.
Posted by stalbertmini at 8:50 PM No comments:

We have finalized our list of dealers for this year's show and sale and the floor plan is going to the hotel! MORE dealers and more tables - a wonderful mix of regulars, returning and new dealers! In fact, we have to go again to a separate room for the displays.

Gay Schmiedchen
Personal collection in 1:12 and Estate of Sherrill Bedu

As well, we also have the Kids' Grab Bag table and the Make and Take Table for children.

Second was when I turned on my computer to report on today - it wouldn't work! Finally turned everything off and unplugged everything and all was well. But some really major anxiety in the meantime.

Anyway (that over), we had a wonderful day. We started getting together around 9 a.m.

As the major focus of the day was going over to Don Saunders' home to see Lorry's miniatures, Joanne organized everyone into two groups - for a 10 am trip and a 1 pm trip with lunch in between the two trips.

I took my library scene to work on and actually got some work done on it. Earlier this week, I had given the container a final coat of spray paint...still not great...but did manage to get a lot of the edges looking better. Got the back scene cut to fit and in place. Still have to cut and fit the carpet. Used moveable miniature glue to keep the books on the book cart and the computer on the reference desk.

This is a based on a librarian/author/speaker Nancy Pearl  How wonderful to see a librarian as an action figure! 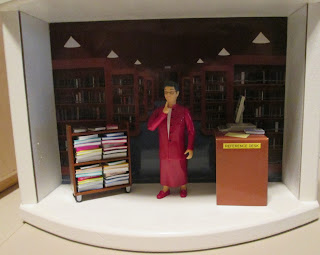 While the first group went over to Don's, the conversation turned to, what else?, books. Trineke mentioned some problems she was having making books for her attic project (her teenage room). So I told everyone about the faux books I make (thanks to Dick Tabor!). Took them some samples and demonstrated how they're made.  Then Trineke and I went to my condo and I showed her some ideas and shortcuts I had found over the years. In doing that, I found a bookmark on my computer that I had completely forgotten about. This site has innumerable dust covers of books prior to 1976. So we played around with that for awhile.

Tina brought us two bags of 'laser poop' to be shared. I took these bracket pieces. There were so many other great pieces that others shared. 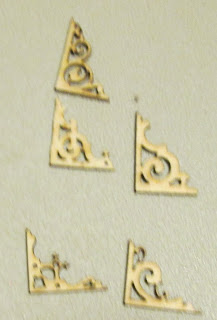 Rosalle of Needleart Treasures by Rosalle brought in her sample sock monkey that she'll be selling at the Show and Sale on September 17. To get the 'tweed' effect of the sock, Rosalle uses two strands of sewing thread and it's an incredibly labour-intensive process. The body, arms, ears, face, etc., are crocheted individually then sewn together. These will sell for $45.00 at the Show and Sale. 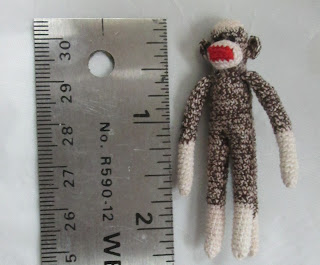 This is where the first major panic time comes in.

I am devastated that I forgot to take my camera over to Don's .I know that others have cameras, especially Bev, who is our newsletter editor, but I SO wanted to show you at least some of Lorry's beautiful work. We were half-way over when I realized I didn't have it.

Bev has promised to send me some pictures so I can share them here.

Posted by stalbertmini at 11:20 PM No comments:

Sunday had to move everything I could out of the dining and living rooms for carpet cleaning on Monday. Tuesday morning started moving things back then Joanne called up on the intercom - I had forgotten she, Sunni and I were to meet with Don Saunders and daughter, Trish, to finalize plans for club members to visit Lorry's collection during Saturday's Mini Day Out.

Just got home to a phone call from DS Shirley. She, DS Marie and DBIL were at Mom's and needed some tools to fix Mom's glasses. Headed over there and visited, went for dinner at the casino with Shirley, Marie and Rob. When I got home from that, dropped off a pamphlet to Kay then stopped by to spend a few minutes at Craft Club.

Marie, bless her heart, brought me a cucumber and some tiny tomatoes from her place and (drum roll, please) a Michael's hutch! And it's a beauty! 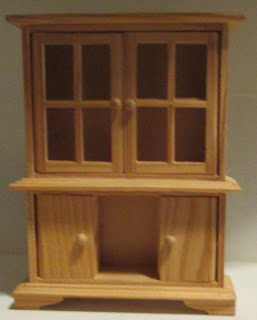 Wednesday, I have a short Board meeting and Thursday, of course, is my Mom's 94th birthday. Friday Joanne and I have to shop for lunch for Mini Day Out and Saturday is Mini Day Out.

Looks like it will be awhile before I get any minis done.
Posted by stalbertmini at 9:29 PM No comments:

Oh, my! I am SO excited about our lineup for the Show and Sale this September 17.

I've mentioned some of the dealers before but will give you more information on them in the next while.

Posted by stalbertmini at 12:13 AM No comments:

Oh, my, it was a busy week: personally, mini and condo-wise!

The worst of it was over by Thursday afternoon BUT that's when Joanne and I went to Chapters to round off the day and I picked up the latest J. D. Robb pocketbook "Echoes in Death". Only problem was that it was a 2 for $15 so I also picked up Lisa Scottoline's "Betrayed". And when I finished that, I realized that I had the sequel "Corrupted" under my coffee table and just finished that one!

Have some interesting posts planned for the blog but for now, good night.
Posted by stalbertmini at 8:51 PM No comments:

I cannot tell a lie...there are a few things left to do: some paperwork, my kitchen project is on a table in the dining room, the dishwasher has to be loaded and I have about 40 things to put on my craft bulletin boards.

BUT other than that, the whole condo is pretty much cleaned. Not bad considering I also read a book today. AND everything was put away properly - not shoved in a box because company was coming!!!

So here's the workroom: 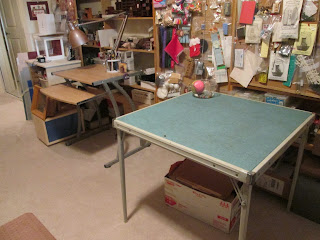 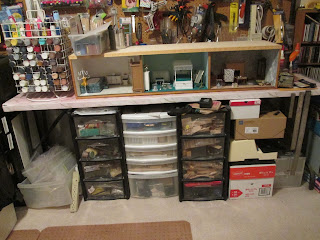 And these are the things that have to go on  the bulletin boards.

Carol and Fred return from their daughter's place in Red Deer tomorrow so will meet them at Mom's before they head back home.

DS Shirley is coming back from the lake on Tuesday with her friend Elizabeth (bringing me new potatoes and baby carrots!) and the three of us will spend Tuesday night together.

On Wednesday, Joanne, I and a few others are going to check out the new 100 yen store at West Edmonton Mall and go for lunch. Then I have a condo board meeting Wednesday night so don't know how much mini-ing I'll get done this week.
Posted by stalbertmini at 8:30 PM No comments:

Last night DD Leanne called and asked if I could go to her place and take delivery of her new bed today (Saturday). Window for delivery was 11 am to 2 pm so I agreed to do it. For some reason, delivery had to be changed from Sunday to Saturday and she couldn't be home.

Then this morning, DS Carol called and said she and Fred were coming out tonight and could they stay with me.

So my whole day was turned upside down....and the workroom didn't get finished.


Posted by stalbertmini at 7:15 PM No comments:

After having to search for something yesterday, I decided that my workroom has be be cleaned before I even think about working on anything.

It's not great but I took these pictures half an hour ago and since then I've sorted through a great portion of it already. 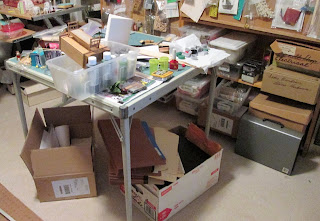 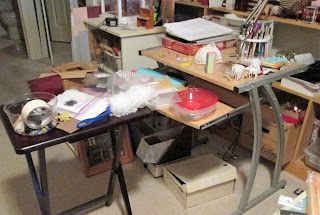 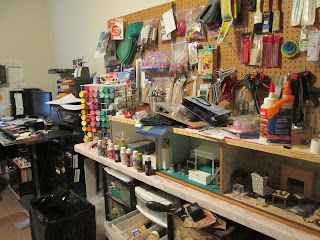 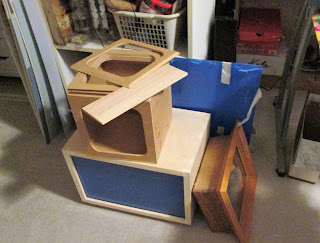 Will do what I can tonight. Have to be at DD Leanne's tomorrow for a delivery as she is busy with a convention but hopefully the Brick will be there earlier, rather than later, and I can make it home to finish up here.
Posted by stalbertmini at 9:05 PM No comments:

Thanks to my dear friend, Trineke, who sent me a lovely email telling how some of my problems in mini had been solved in their RL kitchen, I'm now sort of on track with the lower cabinets.

Then Joanne was over today and we discussed some ideas I have for the upper cabinets. These are a problem as I don't have enough ready-made cabinets so will have to fit cabinets where I can and make some additional pieces such as a microwave shelf and a stove hood. But it's almost coming together in my head. Unfortunately that can be a slow process and I can't proceed until it all comes together.

I'm SO looking forward to getting all these things finished so I can actually fill the fridge and cupboards. I have four cork bulletin boards covered with food, dishes, cutlery, utensils, pots and pans to choose from. Which is sort of silly, in a way, because virtually none of these things will be seen in the final roombox.

With that in mind, I think (for display at the Show) most everything will be behind closed doors but I'll make a small photo album showing the contents of each piece. And, of course, for private viewing, I'll remove the plexiglass front and allow people to open things to see what's behind the doors. In any event, I'll know what's there.


Posted by stalbertmini at 11:28 PM No comments: